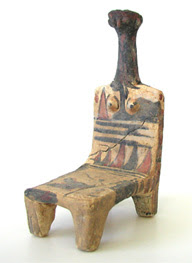 Hola darlings! I'm exhausted. It was one of those "days from Hell" at the office and the weather is right up there supporting Hell Days. The forecast has changed - what promised to be a weekend of temperatures in the low 80's with lower dew point is now scheduled to be in the 90's with higher yet dew points. I tell you, I'm already scraping mold off my legs - and that's just after walking the half mile to the bus stop in the morning! I can see it now - Milwaukee is going to turn into Mold City and there will be sightings of "green and blue" monsters stalking the streets, should that dew point get much higher. I mean - how high can it go? Does it go on to infinity, like an irrational number?

This will be a short, sweet post. I want to continue the line about the "throne" iconography that is everywhere implied in the ancient game of chess but nowhere represented until the Islamists decided that playing with "figural" chess pieces broke a tabu against depicting living beings - or something like that. I still have not read a clear and convincing discussion of where this tabu came from and why anyone would think it could possibly apply to board game pieces. Ah well - religion never has been a very rational undertaking, has it...

When the Islamists designed their "abstract" chess pieces, the "king" and "vizier" took the form of a cylinder (the king's somewhat taller) with a cut out for what looked like a seat. In fact, many commentators have described the pieces as "thrones" - representative certainly of the king and to a lesser extent the vizier who, as the trusted royal advisor who sometimes served as "regent" when the king was absent, was the "power behind the throne." We've all seen those pieces, and variations on the theme. You can see two of those variations on the theme here (the "Nishapur" chess pieces, and also read the original 1943 article that I transcribed a few months back). Those designs, though, came late to the party, relatively speaking, first being seen in chess pieces in the mid-8th century CE.

Now, take a look at the lovely lady at the beginning of this post. She is a female figure, with an elongated neck and conical breasts, in the form of a chair. She was excavated at Ashdod in Israel, and dates to the 12th century BCE. She measures nearly seven inches tall. She was found near a site of cultic activity which, according to the November/December 2005 issue of Biblical Archaeology, may mean that it was used for votive offerings (the site, that is, not the object). Fragments of similar figurines were also found during escavations at Ekron (Israel). This "Ashdoda" figure shows Mycenaen influence, "harkening back to the Philistine homeland in the Aegean."

Now darlings, everyone knows that you don't make a chair simply to stare at it and go "oh how pretty." Chairs are made to be sat upon - and in this example of an Ashdoda (which is a replica offered for sale online by the Israel Museum, Jerusalem) we see the symbolism of the Isis "throne" now physically embodied as a female figure, incorporated into a votive. I'm not suggesting cross-cultural transfer here, although certainly that may have occurred to some extent or other; it is the overarching archetype that keeps cropping up in iconography from all around the Middle East, the Mediterranean and into Asia, crossing all cultural and religious lines and being carried on for thousands of years, that is of true importance here.

It has been said that chess is a game of archetypes. One of those archetypes is the concept of rulership, as embodied in the throne. The throne is a woman. As far back as we have datable archaeological artifacts, the throne is a woman (more on this later). This isn't a feminist manifesto of uterine power - it's just the plain ol' simple truth.
Posted by Jan at 7:12 PM