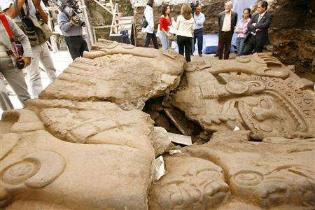 Notice how they call this Goddess a "god" in the article - ha! She is clearly the new-world counterpart to the ubiquitous "White Goddess" (of whom Graves wrote about) of birth, death and regeneration of the old world. It was, in fact, the presence of a giant-sized stone carving of Tlaltecuhtli that tipped off archaeologists that this might be a very important tomb. She was uncovered in Mexico City in November, 2006.
AP Exclusive: Aztec leader's tomb found
By MARK STEVENSON, Associated Press Writer
Fri Aug 3, 3:24 PM ET
MEXICO CITY - Mexican archaeologists using ground-penetrating radar have detected underground chambers they believe contain the remains of Emperor Ahuizotl, who ruled the Aztecs when Columbus landed in the New World. It would be the first tomb of an Aztec ruler ever found.
The find could provide an extraordinary window into Aztec civilization at its apogee. Ahuizotl (ah-WEE-zoh-tuhl), an empire-builder who extended the Aztecs' reach as far as Guatemala, was the last emperor to complete his rule before the Spanish Conquest.
Accounts written by Spanish priests suggest the area was used by the Aztecs to cremate and bury their rulers. But no tomb of an Aztec ruler has ever been found, in part because the Spanish conquerors built their own city atop the Aztec's ceremonial center, leaving behind colonial structures too historically valuable to remove for excavations.
One of those colonial buildings was so damaged in a 1985 earthquake that it had to be torn down, eventually giving experts their first chance to examine the site off Mexico City's Zocalo plaza, between the Metropolitan Cathedral and the ruins of the Templo Mayor pyramid.
Archaeologists told The Associated Press that they have located what appears to be a six-foot-by-six-foot entryway into the tomb about 15 feet below ground. The passage is filled with water, rocks and mud, forcing workers to dig delicately while suspended from slings. Pumps work to keep the water level down.
"We are doing it very, very slowly ... because the responsibility is very great and we want to register everything," said Leonardo Lopez Lujan, the lead government archaeologist on the project. "It's a totally new situation for us, and we don't know exactly what it will be like down there."
As early as this fall, they hope to enter the inner chambers — a damp, low-ceilinged space — and discover the ashes of Ahuizotl, who was likely cremated on a funeral pyre in 1502.
By that time, Columbus had already landed in the New World. But the Aztecs' first contact with Europeans came 17 years later, in 1519, when Hernan Cortes and his band of conquistadors marched into the Mexico Valley and took hostage Ahuizotl's successor, his nephew Montezuma.
Ahuizotl's son Cuauhtemoc (kwow-TAY-mock) took over from Montezuma and led the last resistance to the Spaniards in the battle for Mexico City in 1521. He was later taken prisoner and killed. Like Montezuma, his burial place is unknown.
Because no Aztec royal tomb has ever been found, the archaeologists are literally digging into the unknown. Radar indicates the tomb has up to four chambers, and scientists think they will find a constellation of elaborate offerings to the gods on the floor.
"He must have been buried with solemn ceremony and rich offerings, like vases, ornaments ... and certainly some objects he personally used," said Luis Alberto Martos, director of archaeological studies at Mexico's National Institute of Anthropology and History.
The tomb's curse — water — may also be its blessing. Lopez Lujan said the constant temperature of the pH-neutral water in the flooded chambers, together with the lack of oxygen, discourages decomposition of materials like wood and bone that have been found at other digs around the pyramid, which was all but destroyed in the Conquest.
"This would be quite an important find for Aztec archaeology," said Michael Smith, an archaeologist at Arizona State University who is not connected to the dig. "It would be tremendously important because it would be direct information about kingship, burial and the empire that is difficult to come by otherwise."
All signs found so far point to Ahuizotl. The site lies directly below a huge, recently discovered stone monolith carved with a representation of Tlaltecuhtli (tlahl-tay-KOO-tlee), the Aztec god of the earth.
Depicted as a woman with huge claws and a stream of blood flowing into her mouth as she squats to give birth, Tlaltecuhtli was believed to devour the dead and then give them new life. The god was so fearsome that Aztecs normally buried her depictions face down in the earth. However, this one is face-up.
In the claw of her right foot, the god holds a rabbit and 10 dots, indicating the date "10 Rabbit" — 1502, the year of Ahuizotl's death.
"Our hypothesis is precisely that this is probably the tomb of Ahuizotl," Lopez Lujan said.
Any artifacts linked to Ahuizotl would bring tremendous pride to Mexico. The country has sought unsuccessfully to recover Aztec artifacts like the feather-adorned "shield of Ahuizotl" and the "Montezuma headdress" from the Ethnology Museum in Vienna, Austria.
"Imagine it — this wasn't just any high-ranking man. The Aztecs were the most powerful society of their time before the arrival of the Spaniards," Martos said. "That's why Ahuizotl's tomb down there is so important."
Posted by Jan at 10:57 AM