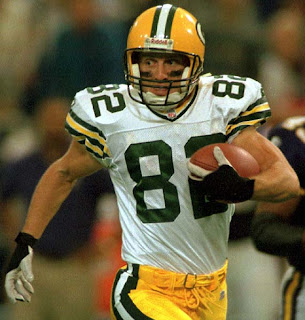 Hola darlings! I'm counting down to kick-off time for the Packers-Giants game at LEGENDARY LAMBEAU FIELD (imagine echo-chamber deep voiceover here...) It's at 5:40 p.m. my time, about 50 minutes away, yipee!

To get in the mood, you know, earlier this afternoon, before the AFC Championship game came on t.v., I watched my geniune "official video" of the 1996 Packers' march to Superbowl XXXI. I bought it at the end of our miraculous 1996 season and I've only watched it a couple of times since then. On the cover is an image of an impossibly young Brett Favre! Watching that video brought back all those memories, it was almost like watching the games all over again.

Desmond Howard. Don Beebe. Oh my Goddess! They were so cute - and had the ride of their lives during that championship season. Beebe caught pass after pass in crucial situations; Howard with all those Special Teams touchdown run-backs on kick-off returns. Antonio Freeman yelling "It aint cold, it aint cold, baby, it's all in your mind," on the sidelines during the 1996 NFC Championship Game against the Carolina Panthers, when the two teams played under very similar conditions that the Packers and Giants will be playing under tonight. Andre Rison saying to Favre on the sidelines after their first touchtown in Superbowl XXXI "Hey, Favre, wherever you want me to be is where I'll be."

Such sweet memories. Getting ready to make some more sweet memories tonight - with all my fingers, toes, arms, legs, and every single strand of the hairs on my head crossed for good luck! May the Goddess be with the Green Bay Packers tonight!
Posted by Jan at 4:48 PM