Salvavor Dali Gives the Finger to a Chess Set 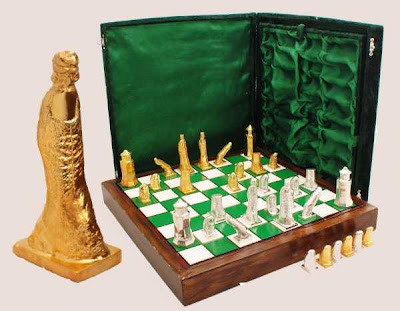 I couldn't resist that article title when I saw it :)

A chess set designed by Salvador Dali reproducing his own fingers sold for $23,400 at Auction Gallery of the Palm Beaches.

A close up look at the details of the digits of renowned artist Salvador Dali (Spanish 1904-1989) could be found in the figures of a chess set designed by Dali at the request of his friend Marcel Duchamp in 1964 for the American Chess Federation. All of the pieces of the set were modeled after Dali’s fingers except the two Queens which used one of Dali’s wife’s fingers crowned with a tooth and the rooks which were modeled after the salt cellars of the Hotel Saint Regis in New York. Of the thirty two pieces sixteen are sterling silver and sixteen are silver gilt. The set was cast by F. J. Cooper of Philadelphia and was signed and numbered “AE 45.”

The set was consigned to Auction Gallery of the Palm Beaches from an estate on Palm Beach Island. The lot, appearing just past half way in the 328 lot sale, was hotly contested among two bidders in the room and one on the phone. One of the bidders in the room had flown in from New York for the sale and this was the only lot he bid on. He outlasted the other bidders claiming the set of finger figures for $23,400 including the buyer’s premium for the top lot of the sale.

The bulk of the January 7 sale was comprised of consignments from local estates and attracted over 400 registered bidders, 293 online through LiveAuctioneers.com, 70 phone bidders and 80 on the floor. Auction owner Brian Kogan remarked that bidders were serious about quality items, often bidding above estimate.
Posted by Jan at 10:25 AM