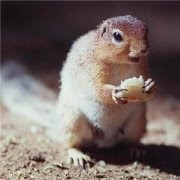 I feel the need to cheer myself up with some squirrel news. For anyone who has ever tried to defeat a squirrel's efforts to get at your bird food, you KNOW just how smart they are. Now, there's some proof to back up anecdotal evidence :) How could anyone want to hurt (or eat, eek!) such a cute little fella? See, he's smiling at us.

From inthenews.co.uk
Friday, 18 Jan 2008 12:27
Squirrels fool other animals by pretending to bury nuts in different locations to protect their store, scientists say.

The crafty animals were found to trick others when they were being watched, even if just by humans.

Squirrels bury spare food to dig up and consume at a later point but researchers at Wilkes University in Wilkes-Barre, Pennsylvania, say that 20 per cent of the time they are faking it. According to the New Scientist, the squirrels act as if they are putting something into a small pit they have dug and then cover the fake cache with soil and leaves - as they would with real food.

Lead researcher Michael Steele and colleagues attempted to find where squirrels were actually burying their food. They found that the squirrels apparently cottoned on to the humans, increasing the number of fake burials. The researchers say this suggest the squirrels have an understanding of the intention to steal. Lisa Leaver at the University of Exeter told the New Scientist that it is too early to tell if squirrels have such a "theory of mind".

"They may just have learned through trial and error that certain behaviours protect their food from theft," she said.
Posted by Jan at 5:32 PM