Any search under the general topic of "chess" will inevitably turn up "Chess Records" - and no, it's not records from various chess events, it's an old recording company that was famous in its day for presenting new and different artists and sounds out of the ordinary way.

I saw this announcement and I'm full of excitement for this project, because one of my favorite vocalists ever is Etta James. Her rendering of "At Last" melts me right to the core - and it was recorded more than 45 years ago.

The Dreamgirls actress will join Adrien Brody, Jeffrey Wright and Cedric the Entertainer in the 1950s-set film, reports AOL.com.

Actor Matt Dillon has been replaced by Oscar-winning Brody in the role of Leonard Chess, the founder of legendary blues label Chess Records, after scheduling conflicts forced him to pull out of the project.

Filming is due to take place later this year (08) in New Jersey and Mississippi. 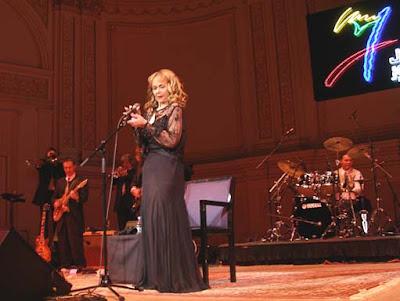 Here's a picture of Etta James taken at the JVC Jazz Festival, Carnegie Hall, June 20, 2006. Photo credit: A. J. Alfaro. Etta, born in 1938, is 70 this year, and still going strong, regularly touring and wowing audiences with her powerful and yet nuanced vocal intonations. A real pro and a woman who has seen and probably done most (if not all) of everything there is to do! Love you, Etta!
Posted by Jan at 10:45 AM