Some claim it is Bigfoot, others insist it is just a rock, but now a new theory for the mysterious "Martian" photograph is gaining popularity on the Internet.

The figure captured by a the Nasa explorer Spirit in 2004 is actually a mermaid statue, and is proof that aliens established Denmark, so the theory goes.

The logic for this outlandish explanation comes from striking similarities between the figure and a sculpture in Copenhagen known as the Little Mermaid. 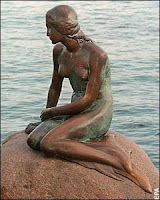 The resemblance has been pointed out on Internet message boards and appears to be one of the many tongue-in-cheek explanations circling cyberspace with the most support.

The Mars statue was "obviously built by an ancient civilisation that later departed Mars and settled Denmark", according to Madurobob on the JREF message board.

Other bloggers have suggested the Martian figure may be the Virgin Mary, or alternatively one of the Sand People - or maybe a Jawa - from the Star Wars films.

Spirit, sent to Mars to capture images from the surface of the planet, is one half of a $820m (£410m) mission, along with its twin explorer, Opportunity.

It landed on Mars in January 2004 for a three month mission to search Gusev Crater, a rock strewn stretch of soil that scientists believe could be the bed of an ancient lake. If Mars once had surface water, it had the potential to support life.

Inspired by the Hans Christian Andersen fairy tale from which it takes its name, The Little Mermaid statue was erected on the water's edge at Langelinie in the Danish capital in 1913.

The work of sculptor Edvard Eriksen, it has become one of the country's biggest tourist attractions and an unofficial national symbol. According to her unofficial website, the mermaid sits on a boulder looking down into the sea, "dreaming about leaving the big sea to find her Prince and an immortal soul".

If I have to guess, I'd say this is the Martian equivalent of the Goddess Venus (Roman) or Aphrodite (Greek):) It looks like a female form to me. She is sitting on a stone ridge, with shoulder-length (or possibly longer) hair, and one arm is extended in what appears to be supplication - perhaps mourning the retreat of the waters on the Mars surface to the Martian poles eons and eons ago?

It's not a live being. As a report at the Daily Grail noted, if it was alive, it wouldn't have just "sat there" and allowed the Mars Rover to approach without some kind of reaction. Never flinched an inch! I don't see any keen resemblance between the Martian sculpture and the Danish "Little Mermaid." The form is all wrong. But then, you know those Danes - always trying to take credit for everything! The real corker is that the - whatever it - is perhaps 6 centimeters tall! A good size for a queen chesspiece but certainly not human size!

In short, she's a fine example of an off-planet simulacrum (or is that simulacra???) Whoa - is that a decaying pyramid on the far horizon? I'm surprised no one has spotted that yet!