Hola darlings! It's raining hard right now, been doing so since about 5:30 p.m. Fortunately, I had my trusty umbrella with me and so during the walk home from the bus stop I was able to keep the rain out of my eyes and face! From about the waist down the rest of me was soaked, oy! Amazingly, there was still some 7 inch deep drifted snow left up near the garage door when I got home - I thought what was left after the past couple days of milder temperatures might have melted away today, particularly with the rain. Oh well. So, I was a good homeowner and tired as I was, and wet as I was, I pulled out the shovel and got even wetter while I shoveled away the rest of the snow. Anyway, while I'm slowly drying off I visited Daily Grail and came across this interesting story. I do not think I've posted about it before. Generally I'm very skeptical when it comes to this kind of thing - particularly speculation that there is a "something" "somewhere" deep beneath Giza that - take your pick - hides (a) endless treasure (b) the knowledge of the Universe (c) Goddess (d) gold-plated bon bons, but I have to say the author has put together a compelling argument that I think warrants further investigation with respect to the reality of a second "mirror" sphinx on the opposite of the Nile. A fascinating logistical problem, trying to pinpoint the possible location of the now destroyed second Sphinx. The article is from Histories & Mysteries, written by Antoine Gigal: A Second Sphinx at Gizeh? 23rd February, 2009 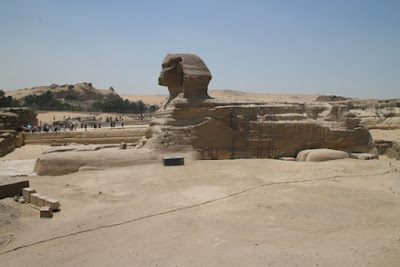 Antoine Gigal is a French writer and researcher, and the Egyptian correspondent for the French ‘L’Egypte’ magazine.Gigal’s early years were spent in Africa and South America, where her father worked as journalist and diplomat. This has taken her all over the world exploring diverse cultures and civilizations. She studied at Sorbonne Paris III University and the National Institute of Oriental Languages and Civilizations (INALCO), where she graduated in Chinese and Japanese languages and civilizations.

Speaking Arabic, Spanish, Italian and French, for the last 20 years, she was lived mainly in Egypt, and calls Paris her second home. Gigal lectures extensively on Egypt and leads several study tours of Egypt every year. Gigal has travelled to even the most remote archaeological areas and is able to gain access to monuments not open to general public. With the eye of an astute detective, Gigal has made a name for herself in France as someone who is able to bring new and first-hand information about the mysteries of ancient Egypt.

I'm wondering about that sacred Sycamore tree that was struck by lightening. How do you get a tree to grow in the middle of the desert? Well, of course, they were quite near the Nile - but you still need dirt, not sand, to grow things in. Did they haul in dirt by the wheel barrow full? Were there special attendants for the tree, who watered it daily during the hot stretches? Did they know about fertilizer (for instance, the American Indians whom the Pilgrims met when they landed at Plymouth Rock taught the English about using dead fish partially buried around the roots of corn plants to help them grow more - granted a couple thousand years later!) and mulching?

So many questions - and no answers.

According to Frazer's "The Golden Bough," Sycamore bough figured in the celebration of the yearly re-enactment of the funeral rites of Osiris as they were described in a "long inscription of the Ptolemic period:" On the twenty-fourth of Khoiak, after sunset, the effigy of Osiris in a coffin of mulberry wood was laid in the grave, and at the ninth hour of the night the effigy which had been made and deposited the year before was removed and placed upon boughs of sycamore. Lastly, on the thirtieth day of Khoiak they repaired to the holy sepulchre, a subterranean chamber over which appears to have grown a cplum of Persea-trees. Entering the vault by the western door, they laid the coffined effigy of the dead god reverently on a bed of snad in the chamger. So they left him to his rest, and departed from the sepulchre by the eastern door. Thus ended the ceremonies in the month of Khoiak."

No mention of what happened to the year-old effigy placed upon the "boughts of sycamore." Was it burned? Was it set on a special reed boat and set adrift on the Nile - perhaps "fired" like the Vikings did a thousand years later?

Also wondering if this quaint custom has any possible connection to the ancient Egyptian rituals:

In discussing "Relics of tree-worship in modern Europe," Frazer cited Sir Henry Piers "Description of Westmeath" writing in 1682: "Among ancient customs still retained by the Cornish, may be reckoned that of decking their doors and porches on the first of May with green boughs of sycamore and hawthorn, and of planting trees, or rather stumps of trees, before their houses."

It's nice to see that there were other references to a 2nd Sphinx. I reported the 2nd Sphinx years ago in Prodigy's web site when I was their Egyptology moderator. At the time I speculated that since the Nile was much closer to the remaining Sphinx and has moved consistently further East, it would have eventually innudated the 2nd Sphinx and eventually taken it away. There was no hills close by to carve the 2nd Sphinx out of and therefor it would have been of an inner core of mudbricks and outer core of stone. If they were facing each other on each side of the Nile they could also have symbolized the line between Upper and Lower Egypt. Dr. Michael Poe

Thanks for your insight. This is a fascinating subject. I re-read the article and was amazed at this quote which escaped my notice the first time:

Musabbihi writes about a “sphinx smaller than the other” (likely because the other one had deteriorated badly by that time) on the other side of the Nile, made from bricks and stones (Annals of Rubi II, ca. 1024).

Thus, the second sphinx was mentioned well within historical memory by someone considered an otherwise reliable source, a mere thousand years ago!