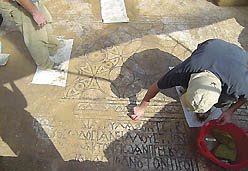 (Photo: Daniel Ein Mor / Antiquities Authority)
Story from Haaretz.com Last update - 17:56 11/03/2009 Archaeologists discover Byzantine-era church in Jerusalem hills By Haaretz Service A church that dates back to the Byzantine period was recently unearthed during construction work at Nes Harim in the Jerusalem hills. The church is [was - see below] paved with mosaics and decorated with an inscription. It was exposed in an archaeological excavation by the Israel Antiquities Authority, after local residents reported unearthing a site that was covered in pine trees and agricultural terraces. In November, during the first excavation in the site, archaeologists exposed the church's narthex - the broad entrance at the front of the church's nave. It was filled with a carpet of polychrome mosaics that was adorned with geometric patterns of intertwined rhomboids separated by flower bud motifs. Unfortunately, at the conclusion of that excavation, the mosaic was defaced and almost completely destroyed by unknown vandals. During that same excavation a complex wine press was partly exposed that consists of at least two upper treading floors and elongated, well-plastered arched cells below them that were probably meant to facilitate the preliminary fermentation of the must. According to archaeologist Daniel Ein Mor, "We know of other Byzantine churches and sites that are believed to be Byzantine monasteries, which are located in the surrounding region. The excavation at Nes Harim supplements our knowledge about the nature of the Christian-Byzantine settlement in the rural areas between the main cities in this part of the country during the Byzantine period, among them Bet Guvrin, Emmaus and Jerusalem."
Posted by Jan at 3:48 PM