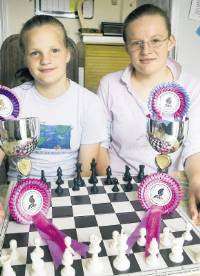 From Meltontimes.co.uk Chess queen Katie set for world championships Published Date: 19 March 2009 By Chris Harby (Image: Katie Hales, right, and her younger sister, also sporting a chess trophy) THURSDAY, 9.35am: A place at the top table of world junior chess awaits Melton teenager Katie Hales later this year. Determined Katie, of Ullswater Road, came through ultra competitive national qualifiers to earn the honour of representing England at the U18 World Youth Chess Championships in Turkey in November. The 17-year-old, who plays for Melton Mowbray Chess Club, had to battle against the odds to win the qualifiers having been without a chess coach since moving to the town three-and-a-half years ago. All of her rivals received regular coaching, but Katie's never-say-die approach and natural aptitude saw her through. Mum Sue said: "She was very pleased just to be taking part in the qualifiers and was the lowest seeded player to be invited, but against all the odds she won. "She has played at a very high level for a long time, but as she gets older the academic work takes up more time and she lost her coach." The five top chess girls fought for one place at the qualifiers, but despite her low seeding Katie built an early lead with wins from the first two games on day one. The first match of the final day Katie faced the top seed, who had already lost one match, but because of a slight error eventually lost out. But victory for Katie and a last-gasp draw for the top seed in the final round of matches put Katie through to the worlds. Mrs Hale added: "She went into it very determined, but wasn't expecting to win. "It was nailbiting, but absolutely great. Katie has got a reputation as a fearsome opponent and always plays better against the harder players." "She will get coaching while she is out in Turkey, but she is really going to need some before she goes. At that level, all the top players have regular coaching. It shows just how good Katie is that she can still beat them without it." Katie is a talented all-rounder and after her A-levels is hoping to study medicine at university. She is good at most sports and was expected to represent the region at the National Army Cadet Cross Country Championships had they not clashed with the chess quailifiers. She also plays in Melton Town Band and is an army cadet, while younger sister Stephanie is also among the elite chess players for her age group in the country.
Posted by Jan at 9:37 PM