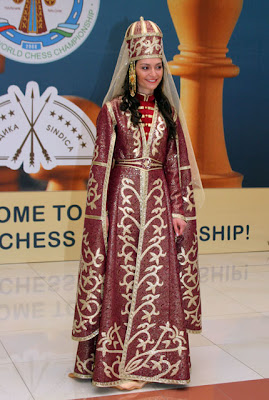 Earlier today Women's World Chess Champion GM Alexandra Kosteniuk gave a 20-game simul in New York to raise funds for the U.S. Chess Trust, a non-profit corporation. (Image: GM Alexandra Kosteniuk in a traditional costume after winner 2008 Women's World Chess Championship held in Nalchik {where?}) Here is some up close and personal coverage from Liz Vicary's blog (the official name of the blog is USCFL News and Gossip but it's popularly known as Lizzie Knows All). Liz's blog has some photos of Kosteniuk and the people who paid (or kids who had sponsors who paid for them) to play in the event. Minimum buy-in was $500. Well, it was a fund raiser for a good cause. Unofficially, I understand that GM Kosteniuk won 19 games and drew one game. Information about the event at Monroi.com, very nicely put together. Monroi also provided coverage of the games. Here is an interview by Beatriz Marinello with GM Kosteniuk. Ms. Marinello is a past President of the U.S. Chess Federation and is currently employed by the U.S. Chess Trust. The interview contains several photos of GM Kosteniuk and GM Kosteniuk with her child.
Posted by Jan at 10:08 PM

We viewed the event at The British International School of New York.
AK was phenomenal!