Chess as Metaphor for Politics 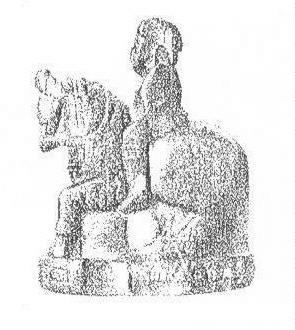 Story from The Independent (Ireland): (Image: Knight, Nishapur (Iran), 7th century CE, The Hermitage Museum) Obama makes all the right moves in Iranian chess game By Catherine Philp Saturday March 21 2009 Could this be Obama's 'Reagan' moment? Already comparisons are being drawn to that president's exhortation to Mr Gorbachev to "tear down that wall" as he stood before the Brandenberg Gate. Ronald Reagan had a real barrier of bricks, mortar and barbed wire on which to project his vision of East-West harmony. Mr Obama's plea is more abstract and more nuanced; less of a call to revolution than food to fuel the growing doubts of the Iranian people about their proud isolation. Contrast his words with George W Bush's bluster about an 'axis of evil'. That phrase did nothing to help Mohammed Khatami, then Iranian President, to sell his moderate agenda and hesitant attempts for rapprochement with the West. Nor did it blunt Iran's nuclear ambitions, which have taken on new momentum since the election of the firebrand demagogue, Mahmoud Ahmadinejad, reaching breakout point this year with the accumulation of enough low-enriched uranium to develop into a bomb. This is the reality that Mr Obama faces: the prospect of a nuclear Iran. Even on a purely tactical level, the military option offers no guarantees of success. Of the different scenarios being game-tested in Washington, only the second least palatable is containment of a nuclear-armed Iran. Mr Obama's advisers have told him, with some authority, that there is no other option than a diplomatic one. Consider this as the second move in a game of chess -- an ancient Persian pastime. Or, to Persian speakers, ta'araf, the elegant conversational process of engaging an interlocutor, absorbing their language in a lengthy process of polite deference, before getting down to business. In his inauguration speech Mr Obama offered to extend a hand of friendship to those who first unclenched their fist. Mr Ahmadinejad responded with surprising positivity -- salted by a healthy dose of Persian chauvinism -- agreeing to talks but only in "an atmosphere of mutual respect". Then yesterday, after acknowledgements of Iran's cultural heritage and warm wishes on its national holiday, Mr Obama echoes Mr Ahmadinejad's own phrase back to him, telling him America seeks "engagement that is honest and grounded in mutual respect". Iran is not North Korea: people will hear this speech. The authorities attempted a crackdown last week on satellite television, aimed at Farsi channels beamed in by dissidents abroad, but news always get through. The BBC's Persian Service is a favourite on radio. The government's first official reaction is telling, harking back to past differences such as the 1953 US-engineered coup, or the 1988 shooting down of an Iranian passenger plane. Many Iranians are tired of the past, and hungry for a different future. Current economic woes have taken their toll on Mr Ahmadinejad's popularity as Iranians realise how little his world-stage grandstanding has done to benefit them. Mr Ahmadinejad asked for mutual respect. Mr Obama has offered it. The ball is in his court. It would be hard to explain to Iranians why he should now balk. Presidential elections are coming in June and Mr Ahmadinejad faces a tough challenge from a newly united opposition. In 2005 the reformists and moderates ran against each other, splitting the anti-Ahmadinejad vote. In 2009 the drive to remove Mr Ahmadinejad is strong enough to have made them join forces. Mohammed Khatami, by far the most popular, but controversial, candidate, dropped out of the race last week, throwing his support behind Mir Hosein Mousavi -- less popular but more acceptable to the ruling clergy, who hold ultimate power in Iran. Suddenly there is a real alternative to Mr Ahmadinejad, and a real chance of him winning. Mr Ahmadinejad ignores this new overture at his own peril, and that is what Mr Obama is banking on. - Catherine Philp
**********************************************************
I found this article particularly interesting, because I believe that chess as westerners would recognize it was first played in ancient Persia - today's Iran. I'm no expert on etymology, but a study of Pahlavi (Middle Persian) words that are used to define and describe chess led me to believe that the game described in the great Persian national epic/history Shah Nameh as having been imported from Hind (a region in Pakistan/formerly considered part of northern India) was actually of Persian origin. Those ancient words for chess/about chess conveyed the sense of a face-to-face meeting; not so much a confrontation as a probing, a learing process, a testing of skills one-on-one, and had more to do with measuring the worthiness of an individual than warfare. It was a drawn-out process, with the players settling in over many days, slowly discovering each other's strengths and weaknesses on the board. Chatrang is, essentially, a game of discovery and growth, for no serious player can ever come away from a game without being changed in some small whit.
Posted by Jan at 12:40 PM