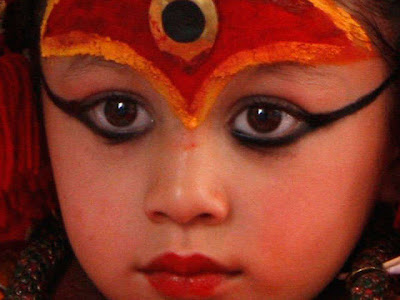 Is she a real Kumari, or is she Memorex (Chinese-approved). How sad to see the demise of this ancient tradition replaced by a Beijing approved sideshow. From The Winnepeg Sun.com Living Goddess attends horse race festival Last Updated: 26th March 2009, 1:50pm Mateena Shakya, 4, locally known as Kumari, a Living Goddess, looks on as she is carried on a palanquin escorted by priests and devotees to attend the horse race festival in Katmandu, Nepal, Thursday, March 26, 2009. (THE ASSOCIATED PRESS) 26th March 2009, 11:52am Living Goddess Kumari (R) is brought to witness performances during the "Ghodejatra" festival in Kathmandu March 26, 2009. The Nepal Army performed various horse related sports and races during the festival. (REUTERS) 26th March 2009, 11:52am
Posted by Jan at 10:12 PM