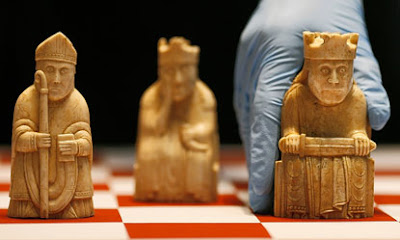 This is a recurring story. From The Evening Standard co.uk Your move ... Scots want chess set back Louise Jury, Chief Arts Correspondent 25 03 09 (Image: Centre stage: the Lewis Chessmen, carved from walrus and whale ivory between 800 and 900 years ago, are given “global status” by being put at the heart of the London display, says the British Museum) THE BRITISH Museum has put a set of elaborately carved chess figures at the heart of a new gallery despite demands that they be returned to Scotland. The 82 Lewis Chessmen, which are between 800 and 900 years old and made from walrus and whale ivory, were seen in a Harry Potter film and inspired the children's TV series Noggin The Nog. Alex Salmond, First Minister of Scotland, wants them repatriated to Edinburgh to be reunited with the rest of the set discovered on the Outer Hebrides in the early 19th century. Just as the Greek government wants the Elgin Marbles in London to be returned to Athens, Mr Salmond claims it is "unacceptable" for the British Museum to have 82 of the figures while the other 11 are in the National Museum of Scotland. But the British Museum is refusing to back down and insists the chessmen are the highlight within the new Paul and Jill Ruddock Gallery of Medieval Europe. The gallery aims to show that medieval Europe was as important as ancient Egypt and Rome. The lushly decorated display includes relics of the bones of 11,000 virgins of Cologne said to have been massacred by Attila The Hun and a reliquary of St Oda, Archbishop of Canterbury who died in AD 958; the so-called Royal Gold Cup originally owned by Charles VI of France, and the only surviving citole, a precursor to the guitar, owned by Elizabeth I. James Robinson, curator of the medieval collections, said of the chess pieces: "They act as the gateway for all the different themes. They speak about feudal society because all the orders in society - king, queen, bishop, infantryman - are there. "But also we're showing the influences coming into Europe from the Islamic East. Chess is a game that comes to Europe through the Islamic countries of southern Spain and Sicily." The chessmen were probably made in Norway when chess was popular among European aristocracy. It is thought they were on their way to being traded in but ended up in Scotland. The pieces were bought by the British Museum after their discovery in 1831. It emerged later that 11 pieces had been already sold. These are the ones now in Scotland. A spokesman for Mr Salmond said: "The Scottish government believes it is unacceptable that 11 Lewis Chessmen rest at the National Museum of Scotland while the other 82 remain in the British Museum and will continue to campaign for a reunited set of Lewis Chessmen in Scotland." The British Museum stresses it often lends the works and a new tour to Lewis and Edinburgh is planned for next year. Mr Robinson said putting them in the context of world cultures at the British Museum gave them their "proper global status". The new gallery cost around £2million. Paul Ruddock, who helped fund it, is chief executive of Lansdowne Partners, an investment management firm, who fell in love with the medieval collection of the British Museum when he was given a replica set of the Lewis chessmen as a child.
Posted by Jan at 7:46 PM