Meresamun, a Priestess of Amun

A Mummy's Life Volume 62 Number 2, March/April 2009 by Eti Bonn-Muller Around 800 B.C., a wealthy Egyptian priestess named Meresamun served the god Amun in the monumental Temple of Karnak at Thebes. Her primary duties were to play percussion, string, and wind instruments that pleased and soothed him, and to sing hymns that praised his name. When she died, her body was mummified and sealed in a skintight coffin of cartonnage (layers of linen and plaster), which had been lavishly painted with her idealized likeness and images to ensure a successful journey to the afterlife. Among other motifs, there are garlands of flowers, a reference to regeneration; a sun disk hovering above a falcon, both symbols of rebirth; the four sons of the god Horus, protectors of the viscera that were removed from her body; and two jackals representing the god Wepwawet, "opener of the way" to the necropolis. The mummy was purchased in 1920 by University of Chicago archaeologist James Henry Breasted and has been in the Oriental Institute Museum's collection ever since. The fragile coffin was never opened and the body never unwrapped because generations of curious curators couldn't bring themselves to destroy the beautiful decorations. But recent analysis on a state-of-the-art Philips 256-slice iCT scanner is now allowing experts to examine Meresamun as never before. The results of the study, along with ground-breaking research on the role of priestess-musicians in the temple and at home, are the subjects of the museum's current exhibition, The Life of Meresamun: A Temple Singer in Ancient Egypt. Last September, Egyptologist Emily Teeter, curator of the exhibition, and a team of conservators placed Meresamun's coffin, secured by foam wedges and linen straps, into a rectangular wooden crate. On the outside, the exhibition designers had painted black wedjat eyes, protective symbols often depicted on ancient Egyptian coffins, believed to allow the mummy to see out. "We didn't want her to feel boxed up," says Teeter, a slender woman with a silvery bob. Then they loaded the mummy into a truck and drove across campus to the University of Chicago Hospital's emergency room. They placed the crate on a gurney and wheeled it into the CT suite, where physicians routinely take X-ray cross sections of tissue to diagnose cancer, cardiovascular disease, and other medical conditions. Nearly 40 people crammed into the hospital's CT suite to witness the historic scans: sales reps from Philips, two film crews, radiologists, nurses, security guards, and museum specialists. "Oh, my God, it was exciting for everybody!" recalls Geoff Emberling, director of the Oriental Institute Museum. Eti Bonn-Muller is ARCHAEOLOGY's Managing Editor. 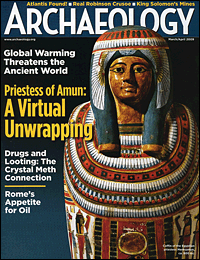 Emily Teeter gives a brief overview of what the Egyptian priestess' life would have been like, as part of comprehensive coverage of the priestess at Archaeology Magazine: The Life of Meresamun: A Temple Singer in Ancient Egypt by Emily Teeter How an Egyptian Mummy Winds Up in Chicago by Eti Bonn-Muller The Oriental Institute at the University of Chicago is hosting a special exhibit of Meresamun February 10 - December 6, 2009.
Posted by Jan at 7:08 PM

Last week the University of Chicago Magazine launched an interactive feature that allows you to take an virtual peek into Meresamun's coffin.

Check it out here: http://magazine.uchicago.edu/mummy/meresamun.shtml