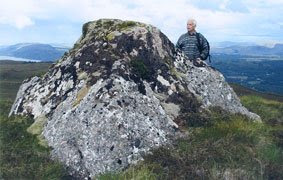 Story from the Inverness Courier Boulder could have been a calendar – 5000 years ago By Hugh Ross Published: 27 March, 2009 AN amateur archaeologist believes a giant boulder on a hill overlooking Loch Ness was used as a guide for crop sowing and harvesting by residents of in the Great Glen more than 5000 years ago. John Forsyth, who lives in Lower Foyers and describes himself as a natural naturalist, is convinced the five-metre wide rock, which he can see on the horizon opposite his home, was intentionally placed there by early man. The 76-year-old — who was voted a corresponding member of the Society of Antiquaries of Scotland for services to archaeology — believes the boulder was positioned and sculpted so people could use it as a marker against the sun to signal when their crops should be planted in spring and harvested in autumn. He believes a community lived to the east of the boulder, which is between Creag Dhearg and Meall Fuar-Mhonaidh, and used the setting of the sun to establish the spring and autumn equinoxes — when day and night is roughly the same length. As part of his research, Mr Forsyth used a global positioning system to locate another rock behind his home which lies directly east of the boulder and has the same latitude, suggesting an alignment which he thinks is deliberate. The retired geography teacher spent the spring equinox — Friday 20th March — photographing the sun setting to ensure his calculations were accurate. "It was very exciting but I was lucky because there are only two days in the year I could do it and luckily there wasn't a cloud in the sky," he said. "I was waiting with bated breath and started getting very tense and uptight when the sun started coming down. "When it started to disappear behind the hill it came right down perfectly on top of the boulder. I was delighted!" Mr Forsyth takes a keen interest in archaeology and believes the boulder was last moved at around the same time as the Callanish Standing Stones on Lewis and the structures at Stonehenge were erected. "I'm very confident it's from that time because the boulder is firmly embedded in peat and there is lichen on its surface," he said. How the people of the time managed to put the boulder there is another question, admitted Mr Forsyth, who is confident of his findings, despite another school of thought that markers were also used by man in an attempt to find out more about the sun, moon and stars. Highland Council archaeologist Kirsty Cameron was interested to learn of the theory. "People who were living in that time had a very good use of astronomy," she said. "We encourage people to contact us about sites of possible interest but establishing a time for this is hard to prove and because it's a stone, it can't be excavated. I would be keen to find out more about it." Mr Forsyth has also notified the Highland Astronomical Society of his discovery and has received a flurry of e-mails from members keen to learn more.
Posted by Jan at 7:50 PM