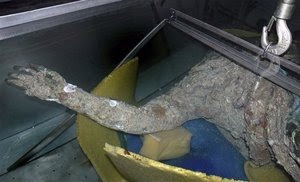 Greek fisherman nets 2,200-year-old bronze statue The Associated Press Published: Mon, Mar. 23, 2009 01:44PM Modified Mon, Mar. 23, 2009 03:30PM ATHENS, Greece -- A Greek fisherman must have been expecting a monster of a catch when he brought up his nets in the Aegean Sea last week. Instead, Greek authorities say his haul was a section of a 2,200-year-old bronze statue of a horseman. A Culture Ministry announcement said Monday the accidental find was made in waters between the eastern islands of Kos and Kalymnos. The fisherman handed over the corroded metal figure to authorities, who have started the cleaning process. AP Photo - In this handout photo provided by the Greek Ministry of Culture on Monday, March 23, 2009, the torso and raised right arm of a 2,200-year-old statue are seen after it was raised in a fisherman's nets. The ministry said the find, dating to the late 2nd century B.C. was part of an equestrian statue of an armed man wearing a breastplate and carrying a sheathed sword. It was accidentally found last week in the eastern Aegean Sea between the islands of Kos and Kalymnos. Dating to the late 2nd century B.C., the statue represented a male rider wearing ornate breast armor over a short tunic and armed with a sheathed sword. The trunk of the horseman and his raised right arm have survived.
Posted by Jan at 7:49 PM