The Powder and the Glory 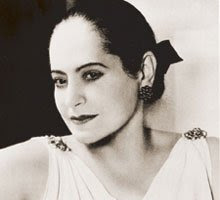 Wow! I just spent an absolutely fascinating hour and a half watching the PBS special "The Powder and the Glory" about Helena Rubinstein (image, right) and Elizabeth Arden. I highly recommend this special to anyone interested in successful, powerful business people who happen to be women, the world of cosmetics, high fashion and interior decorating, "high society," and anti-Semitism at the turn of the 20th century. These two women, from such disparate backgrounds, were keen competitors for some 50 years, with flag-ship stores on Fifth Avenue in New York City. Each contributed to the creation of a multi-billion dollar industry that began out of their own kitchens with unique cosmetic products. Add marketing and design genius and relentless drive, and each woman created a vast commercial empire bearing their names. Along the way you'll meet such brand names (and some of the people behind them) as Maybelline, Cover Girl, Revlon and Estee Lauder. Both women broke stereo-typical molds of womanhood during their time, blazed trails and built empires. When Rubinstein's offer to purchase a posh New York east side residence was turned down because of her "race," she purchased the entire building and turned it into a tri-plex townhouse where she spent the last 21 years of her life. The "names" of Arden and Rubinstein continue today, but both business empires were sold after the deaths of Rubinstein (1965) and Arden (1966). Rubinstein had an intact fortune of at least One Hundred Million Dollars at the time of her death, while Arden's estate was in disarray and basically broke. These two strong, independent and - dare I use the much-berated term - LIBERATED - women, lived long enough to see the rise of Twiggy, mini-skirts, and the birth control pill which revolutionized sexual relations between females and males. Found this book at Amazon about the rivalry of these two Queens of their respective business empires: War Paint: Madame Helena Rubinstein and Miss Elizabeth Arden, Their Lives, Their Times, Their Rivalry (Hardcover) by Lindy Woodhead (Author)
Posted by Jan at 9:27 PM