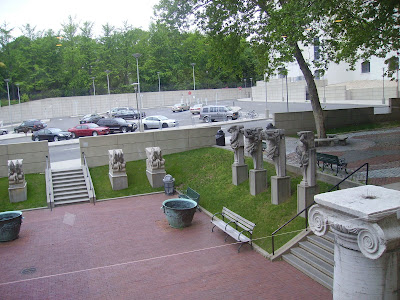 Unwrapping Brooklyn's Mummies July 23, 2009 There is an interview of Edward Bleiberg, curator of Egyptian, Classical, and Ancient Middle Eastern Art, and Lisa Burno, Head Objects Conservator, at the website for Archaeology Magazine, about the recent CT scans of four full mummies from the Museum's collection, the results of which yielded some surprises. dondelion and I spent a day at the Brooklyn Museum during our May visit to New York, after I managed to get past the turnstyle in the subway where we caught the number 2 train that eventually got us to our destination. It has a great collection of ancient Egyptian artifacts - I believe I read that it is the third largest collection in the United States. When we go back to New York again (which I'm sure we will), we'll spend more time there - now that I know the mystery of how to get past the subway turnstyle (hint: the Port Authority should prominently display signs advising left-handed people to swipe their fare card with the right hand!) (Photo: Taken May 17, 2009 by dondelion, a shot of the courtyard at the Brooklyn Museum. It is lined with replicas of classic columns and is used as a teaching tool for field trips of school children.)
Posted by Jan at 6:38 PM