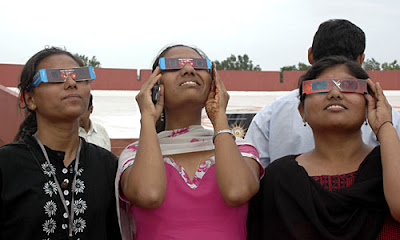 [Image: Ajit Solanki / Associated Press
Visitors at Science City in Ahmadabad, India, try out solar goggles after a demonstration on how to safely watch a solar eclipse today.]

And now crops up this article. Suspiciously auspicious, I'd say, particularly since a similar inscription in another temple indicates that contributions to the temple should be made during the time of the eclipse. Hmmm...

PALANI: Archaeologists have found a stone inscription at Periyanayaki Amman temple in Palani dating back to 17th century that mentions a solar eclipse that took place at that time.

Periyanayaki Amman temple is one of the important satellite shrines of Arul­mighu Dhandayuthapani Swamy temple in Palani. This temple was constructed in the 14th century by the Pandiya kings, who worshipped Lord Shiva. After its destruction by Malik Kafur, the Nayakkar dynasty built a shrine for Amman at the same site.

Archaeologist Narayanamoorthy, architect Manivannan and professors of history from women’s college conducted research in the temple when they stumbled upon a stone inscription on the wall of the 'yaga sala', that mentions solar eclipse. [Are the professors of history unnamed in the article because they are female?]

Only four lines of the inscription are now visible, as all other lines had been obliterated over a period of time.

Narayanamoorthy said that from the available lines they could decipher that the day of solar eclipse was an auspicious occasion and on that day land was donated to the temple by royalty.

He said that the 17th century inscription shows that even at that time the Tamilians were able to forecast solar eclipse and indicate the times when it would occur.

A similar stone inscription was found in the cave temple in Palani, etched by King Malligarjuna Rayar. That inscription had also described the period of solar eclipse as the auspicious time for giving donations.
Posted by Jan at 9:29 PM