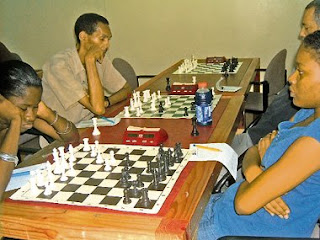 From the Jamaica Observer Richards prevails in women's chess champs Saturday, July 25, 2009 (Photo: Richards, right and Smith, left) Woman FIDE Master (WFM) Deborah Richards (JAM 1983) secured her eighth consecutive hold on the National Women's Chess Championship title on Sunday after securing a final round win against main rival Melisha Smith at the Norman Manley Law School. Richards ended the championship unbeaten on eight-and-a-half points, two full points ahead of her nearest rival. The final top-of-the-table clash between Richards and Smith was more of the same, as Richards emphasised her dominance over women's chess in Jamaica, when she uncorked one of the less used defences, the Benoni, to win the match. This was Richards' second straight tournament win this year, after returning to chess full-time from her studies at the University of the West Indies. She also won the main event of the Robert Wheeler Open in May, which saw some of Jamaica's top male players participating. Smith ended the Championship on 6.5 points, tied in second place with her sister Annesha, who got past Campion College's Ashley Ferguson to secure a share of the second prize.
Posted by Jan at 10:48 AM