The Origins of Clothing 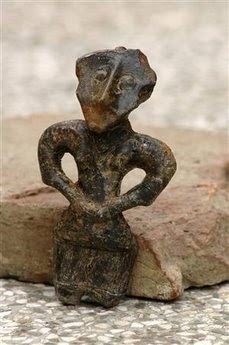 [Image: An example of early clothing from my image archives. Figurine from Plocknik, about 6,500 years old. Wearing a short string-skirt, bracelets, and a tight fitted blouse with long sleeves.] Our earliest ancestors were not born clothed, and nor are we. It makes sense that at some point we had to develop different kinds of clothing and the technology to produce it. So when did this happen, and why? A fascinating topic - rather like Goddesschess' quest for the origins of chess! The article was first published in September, 2008 but I didn't find it until tonight: When and wear: the prehistory of clothing Monday, 01 September 2008 By Simon Couper Ask Ian Gilligan about his research project, and he’ll begin with a contradiction. “My great interest is in clothing, because I think it’s our most important invention,” he says. “But the next thing I’m going to say is that I’m not interested in clothing at all.” Is this the sign of a confused mind, or a rampant contrarian? Far from it. The doctoral researcher from the School of Archaeology and Anthropology at ANU is simply making it clear that he’s not concerned with the vicissitudes of fashion: the latest outpouring of haute couture or prêt-à-porter. Instead, he’s fascinated by how humans came to develop clothing, and how that innovation might have in turn given our species an evolutionary edge over other hominids. Rest of article.
Posted by Jan at 8:53 PM