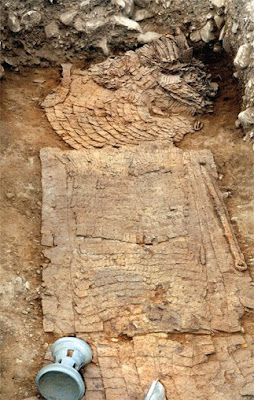 From the JoongAng Daily (Seoul) - very interesting article, with lots of graphics. The horse armor is especially fascinating. I wonder if this could have been the model for much later horse armor used in Europe??? Ancient Silla armor comes to light The recent discovery of the armor of Silla Dynasty cavalrymen has provided proof of the existence of these mythical men. July 22, 2009 By Lee Kyong-hee GYEONGJU - The warrior’s body and bones are long gone, decayed into the soil. But the armor that once protected him from enemy swords and arrows has survived the passage of time and has been revealed for the first time in 1,600 years. The armor of the heavily protected cavalrymen of the Silla Dynasty (57 B.C. - A.D. 935) - proof of which has previously existed only in paintings - was discovered in the ancient tombs of the Jjoksaem District of Hwango-dong, Gyeongju, North Gyeongsang. The Jjoksaem District has the largest concentration of ancient Silla Dynasty tombs in Korea. 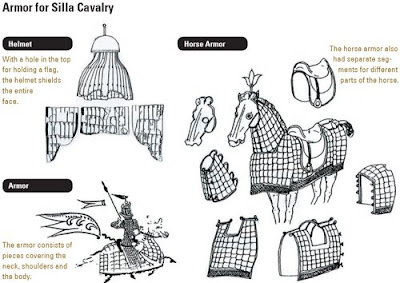 The armor was believed to have been used by Silla warriors sometime between the fourth and sixth centuries. Although the discovery may not be as impressive as the terra-cotta figures of ancient China, it is just as important to the field of archaeology in Korea. This is the first time such a vast array of the armor of the cavalrymen of the Three Kingdoms period (57 B.C. - A.D. 668) has been unearthed in such good condition. The Three Kingdoms era in Korea refers to the period in which three kingdoms - Goguryeo, Baekje and Silla - ruled the country. Last month, archaeologists at the Gyeongju National Research Institute of Cultural Heritage and officials of the Cultural Heritage Administration opened the excavation site to the public. The armor on display included complete sets of scale armor and barding, or armor for horses. “This is the first time in East Asia that such complete sets of the armor of the heavily armed cavalrymen have been found,” Lee Geon-mu, the chief of the Cultural Heritage Administration, said. “It’s also the first evidence of the existence of the Silla cavalrymen.” Rest of article.
Posted by Jan at 7:18 PM