Here are some interesting posts from Facebook about WGM Salome Melia: Championnat de Montréal The Woman Grand Master Salome Melia in visit from Georgia will give a simultaneous exhibition at Cafe Pi 4127 boul. Saint-Laurent Montreal Wednesday at 07:00 pm. $10 per person. She will make a presentation prior to the games about chess in Georgia. ...The presentation will be in English. All income will go to her. This is great news! Goddess, I wish I could be there, would love to play against Melia, even though I'm the merest patzer! I miss Cafe Pi. I haven't been to Montreal since June, 2003. Mr. Don and I visited there all the times I was in Montreal. We love the place. It's a long, narrow brick building on St. Laurent Boulevard (I still mistakenly call it St. Lawrence Avenue). They served very strong, bitter coffee at cheap prices and rented vinyl board and pieces (some missing and substituted with whatever was at hand, lol!) at - I think the last time we were there, it was less than a dollar! At that time you could buy soft drinks (soda) out of a vending machine and also snacks, but when we visited we were just looking to have coffee and play a chess game or two. I'm glad to see from visiting the current website that they've upgraded their menu and one hopes the coffee is not burnt anymore :) We drank it anyway - it woke us up. 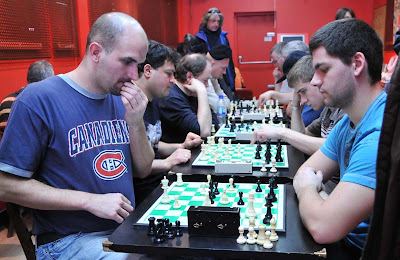 The clean white walls were lined with art for sale by local artists. For all the times I visited Cafe Pi the same clerk was behind the counter, a very attractive and personable young lady who remembered Mr. Don and I (amazingly, given the space of time between our visits), of dark, punky styled and uber-fashionable hair with unfortunate piercings all over the place. I would not want those piercings 40 years from now, eek! The most serious players sit at the very front of the building, where the smoke from their incessant cigarettes drifts out in the summer through open air, as the glass-to-ceiling-windows are opened to clear the way to the sidewalk. There were some tables squeezed together outside under the windows, too, and those were the most popular places to play during the summer despite the sidewalk traffic, particularly in the evenings it was constant. Toward the back of the space are the rest-rooms for femmes and hommes. One night while Mr. Don and I sat playing chess, I saw a homme go into the ladies' rest room! Evidently he couldn't hold it any longer and the men's restroom was occupied (why wait so long until you're hopping from foot to foot to visit the restroom?) I was very insulted! I did not want men peeing all over the women's rest room toilet seat! Invariably their aim is very bad... During the warm season the back door is open to provide cross ventilation in addition to ceiling fans. Kibitzers are welcome. As I was usually the only femme in the place when we visited, Mr. Don and I attracted some attention. It was very disconcerting. Now I see from the photo I posted above from a 2009 Blitz Tournament held at Pi that the walls are red. Were they always red? My memory isn't the best! I do remember them as white, but I may be wrong. Not sure red walls are the best color to encourage contemplation while playing chess, ha! Championnat de Montréal The Montreal Open Chess Championship and members of the chess community in Quebec would like to persuade the WGM Salome Melia to move in Quebec. Her presence on the top boards is required and would open the door to Women championship titles in our various tournaments. Although our market is small, it would be granted to her! She is also a very beautiful and attractive woman with easyness to talk to people. Perhaps someone has become infatuated with WGM Melia :) There are many promising female chessplayers in Montreal and in Canada. What they need are better conditions and encouragement to keep playing! Money would help, too! We all need to make a living at some point in our lives and trying to make a living by playing chess - ach! It is not always possible, alas.
Posted by Jan at 12:50 PM