What's Going on Inside Your Dog's Mind? 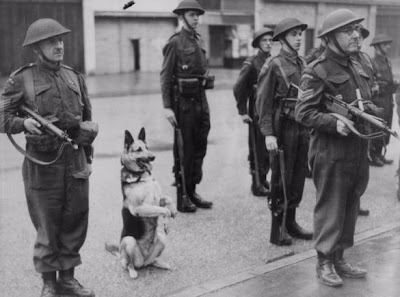 From Time.com Image: From The Times Online.uk photo archives - this is Queenie. company of the 5th London (Press) Battalion of the Home Guard lines up in readiness for inspection in November 1943 before giving a demonstration of street fighting to members of a Kent unit of the Home Guard. ’Queenie’, the Press Battalion’s alsatian mascot, seems to be well drilled too. Elsewhere, the Red Army had just recaptured the city of Kiev and the RAF had begun intensive bombing of Berlin. The Secrets Inside Your Dog's Mind By Carl Zimmer Monday, Sep. 21, 2009 Brian Hare, assistant professor of evolutionary anthropology at Duke University, holds out a dog biscuit. "Henry!" he says. Henry is a big black schnauzer-poodle mix--a schnoodle, in the words of his owner, Tracy Kivell, another Duke anthropologist. Kivell holds on to Henry's collar so that he can only gaze at the biscuit. "You got it?" Hare asks Henry. Hare then steps back until he's standing between a pair of inverted plastic cups on the floor. He quickly puts the hand holding the biscuit under one cup, then the other, and holds up both empty hands. Hare could run a very profitable shell game. No one in the room--neither dog nor human--can tell which cup hides the biscuit. Henry could find the biscuit by sniffing the cups or knocking them over. But Hare does not plan to let him have it so easy. Instead, he simply points at the cup on the right. Henry looks at Hare's hand and follows the pointed finger. Kivell then releases the leash, and Henry walks over to the cup that Hare is pointing to. Hare lifts it to reveal the biscuit reward. Henry the schnoodle just did a remarkable thing. Understanding a pointed finger may seem easy, but consider this: while humans and canines can do it naturally, no other known species in the animal kingdom can. Consider too all the mental work that goes into figuring out what a pointed finger means: paying close attention to a person, recognizing that a gesture reflects a thought, that another animal can even have a thought. Henry, as Kivell affectionately admits, may not be "the sharpest knife in the drawer," but compared to other animals, he's a true scholar. It's no coincidence that the two species that pass Hare's pointing test also share a profound cross-species bond. Many animals have some level of social intelligence, allowing them to coexist and cooperate with other members of their species. Wolves, for example--the probable ancestors of dogs--live in packs that hunt together and have a complex hierarchy. But dogs have evolved an extraordinarily rich social intelligence as they've adapted to life with us. All the things we love about our dogs--the joy they seem to take in our presence, the many ways they integrate themselves into our lives--spring from those social skills. Hare and others are trying to figure out how the intimate coexistence of humans and dogs has shaped the animal's remarkable abilities. Rest of article (it's lengthy, but really good reading!)
Posted by Jan at 7:00 PM