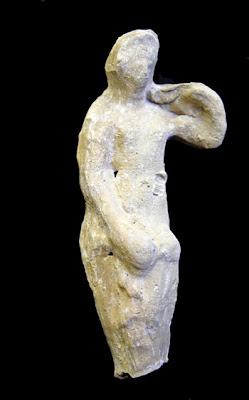 (Image: from original article at Live Science) Ancient Aphrodite Figures Hint at Pagan Resistance Excerpted from a Live Science story at Yahoo News Mon Sep 14, 2:07 pm ET Three figurines of Aphrodite, the ancient Greek goddess of love, have been found buried underground in the remains of a shop in a Roman city built in the second century B.C. The hidden figures hint at the reluctance of some denizens of the Roman Empire to give up their pagan beliefs despite the spread of Christianity. The ancient treasure, buried for more than 1,500 years, was uncovered during the tenth season of excavations that are being carried out by researchers of the Zinman Institute of Archaeology at the University of Haifa. The hidden statues were discovered when the researchers exposed a shop in the southeastern corner of the forum district of Sussita, which is the central area of the mountaintop Roman city that existed through the Roman and Byzantine periods and destroyed in the great earthquake of 749 A.D. Sussita, also known as Hippos, is located in Israel and sits on a hill overlooking the Sea of Galilee. The city was originally built by Greek colonists, but later came under Roman rule. The researchers say it was clear the followers had wished to hide the figurines, as they were found complete. "It is possible that during the fourth century A.D., when Christianity was gradually becoming the governing religion in the Roman Empire, there were still a number of inhabitants in Sussita who remained loyal to the goddess of love and therefore wished to hide and preserve these items," said Arthur Segal, one of the excavation's leaders. The clay pieces are 9 inches (23 cm) tall and represent the common model of the goddess of love known to the experts as Venus pudica, "the modest Venus." This name was given to the form due to its upright stature and the figure's covering her private parts with the palm of her hand. (Venus is the Roman name for the goddess of love. The term 'aphrodisiac' comes from the Greek name of the goddess.
Posted by Jan at 6:26 PM