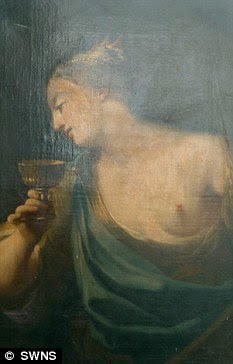 Story from the dailymail.co.uk BBC orders auction house to remove neo-classical goddess painting 'in case nipple offends viewers' By Daily Mail Reporter Last updated at 12:29 AM on 22nd January 2010 (Image of the "offensive" painting, done in the days when women did not use surgically implanted silicon balloons to achieve 34EEE cup size. She looks like a nice healthy farm girl to me.) BBC bosses ordered an auction house to remove a neo-classical oil painting of a semi-naked woman in case her exposed nipple offended viewers. Auctioneer Alan Aldridge was being filmed for Flog it!, BBC2's daytime antique programme, when the production team asked him to take down the 19th-century oil painting. It features the mythical Greek goddess Ariadne holding a goblet of wine with her left breast exposed. Mr Aldridge, who runs Aldridge Auctioneers in Devizes, Wiltshire, offered to cover the offending nipple, but was still told to take the canvas down. He said: 'It is absolutely ridiculous. 'This is a 19th century neo-classical work of art. I can't imagine anyone getting offended over a naked female nipple these days. 'I tried putting a Post-It note over the offending part of her anatomy, but that wasn't good enough apparently.' Flog it! presenter Paul Martin, who lives in nearby Seend and used to run an antiques shop, defended the decision saying viewers would complain. He said: 'Yes, they had to have the painting moved. It wasn't a big deal but they do get complaints about this sort of thing. You'd be surprised.' The crew were filming for an episode of Flog it! which is due to be aired in the spring. Viewers of the 30-minute programme, which involves members of the public trying to make money out of their antiques, will however see a single strand of Elvis Presley's hair being sold for £350. During the show a collection of football programmes also sold for £670. In Greek mythology, Ariadne was daughter of King Minos of Crete and his Queen Pasiphak, daughter of Helios, the sun Titan. She helped Theseus overcome the Minotaur and was also the bride of the god Dionysus.
Posted by Jan at 8:46 PM