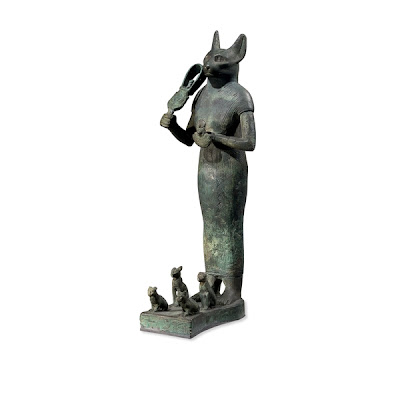 Image: British Museum. From Egypt Late Period or Ptolemaic Period, about 664-30 BC. Bastet shaking a sistrum and holding an aegis, with kittens at her feet . Story from the AP, as reported earlier today at Yahoo news: Egypt announces find of ancient cat goddess temple By HAMZA HENDAWI, Associated Press Writer Hamza Hendawi, Associated Press Writer – Tue Jan 19, 6:22 pm ET CAIRO – Archaeologists have unearthed a 2,000-year-old temple that may have been dedicated to the ancient Egyptian cat goddess, Bastet, the Supreme Council of Antiquities said Tuesday. The ruins of the Ptolemaic-era temple were discovered by Egyptian archaeologists in the heart of the Mediterranean port city of Alexandria, founded by Alexander the Great in the 4th century B.C. The city was the seat of the Greek-speaking Ptolemaic Dynasty, which ruled over Egypt for 300 years until the suicide of Queen Cleopatra. The statement said the temple was thought to belong to Queen Berenice, wife of King Ptolemy III who ruled Egypt in the 3rd century B.C. Mohammed Abdel-Maqsood, the Egyptian archaeologist who led the excavation team, said the discovery may be the first trace of the long-sought location of Alexandria's royal quarter. The large number of statues depicting Bastet found in the ruins, he said, suggested that this may be the first Ptolemaic-era temple dedicated to the cat goddess to be discovered in Alexandria. This would indicate that the worship of the ancient Egyptian cat-goddess continued during the later, Greek-influenced, Ptolemaic period, he said. Statues of other ancient Egyptian deities were also found in the ruins, he added. Zahi Hawass, Egypt's chief archaeologist, said the temple may have been used in later times as a quarry as evidenced by the large number of missing stone blocks. Modern Alexandria was built squarely on top of the ruins of the classical-era city and many of its great temples, palaces and libraries remain undiscovered. The temple was found in the Kom el-Dekkah neighborhood near the city's main train station and home to a Roman-era amphitheater and well preserved mosaics. For further information on Bastet (Bast): The Gods of Ancient Egypt: Bast (from Tour Egypt) Bast (also spelled Ubasti, Baset, and later Bastet) from Crystal Links - includes some images of Bast, unfortunately not accredited per-Bast.org - lots of explanatory information here about the parallel nature of goddesses from Lower (northern) and Upper (southern) Egypt. Confusing, heh? The Nile River runs from the mountains in the countries to the south of Egypt northwards, toward the delta region and the Mediterranean Sea; thus, looking at a modern-day map, "Upper" Egypt (from the source of the Nile) is south, and "Lower" Egypt (the Delta region to which the Nile flows) is north. Plain as the thick alluvial mud that the Nile floods brought from the mountains annually (usually) - right?
Posted by Jan at 9:54 PM

This is absolutely wonderful news ! Thank you for sharing this. Here is a link to an animated GIF which shows the spelling of the name of Bast in hieroglyphs and its relation to the grapheme of the alabaster unguent jar. This is a connection which remains alive within our word "alabaster".

This is an excellent article. I tried to post a link to your blogsite on my MySpace page but MySpace.com are still blocking all links to superior blogsites (like BlogSpot.com) and are claiming that the links are to pages which are used by spammers and phishers! Don't take my word for it - check it our for yourself. Such corporate censorship needs to be challenged.

Hello Chess Femmes. I'm consoling myself regarding the death (from breast cancer) of my fur-daughter, yesterday, by looking at sites that have something to do with Bast. I love the inner pawn idea. Thank you. Madame Pompadour in the Wasatch Mountains