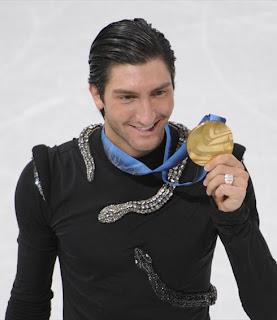 Evan Lysacek did it when it counted - last night, on the ice, possibly the greatest performance of his life.  Intense, near perfect, the program perfectly designed to highlight his strengths -- great spins and balance, solid triple jumps, intricately edged footwork, perfect coordination of the choreography with the music and just the right emotional note - not too little, not too hammy.

The entire routine was balanced between athleticism and artistry - and carefully designed so that in the second half of the program, four jumps (some in combination) were performed for a 10% bonus of the score for each jump/combination.  It is in the second half of the 4:40 minutes that the men skate that their legs are burning and feeling heavy, and it takes extra effort, willpower, strength and conditioning - whatever it takes - to make those jumps and not only make them, but to land them and land them well.  Here is the video (I hope) at NBC's website of Lysacek's gold-winning performance.  I found it mesmerizing.

Personally, I believe the Goddess had a hand in his victory.  Yes, I know I know, you'll pooh-pooh me, LOL!  But before you dismiss me altogether, consider two design elements that were an integral part - indeed, perhaps the most important part - of his costume.

Do you see them?  They're as plain as day. Two serpents - Goddess symbols! (Photo: USA Today file)  Did the costume designer actually know this, and purposely incorporate those symbols on Lysacek's costume?  I've no idea.  But, Scheherazade, the great, transcendent musical suite of Rimsky-Korsakov, is firmly based in Persian myths and legends from pre-Islamic times.  Barbara Walker, in her discussion of serpent symbolism in The Women's Encyclopedia of Myths and Secrets, says:

Arabian tradition identified the food of immortality with the female uterine blood, colored "royal purple"; and the Mother's uterine garden with the moon temple at Marib in Sheba.  Legend said the serpents of Sheba were purple with the divine essence, and lived in trees; the people were serpentlike, with forked tongues, great wisdom, and longevity. (41)  From Sheba might have come the mysterious life-giving substance called shiba in the Epic of Gilgamesh, dispensed by the wife of Uta-Napishtim (Noah), who had become the only immortal man; his wife therefore was a Goddess.  When this holy matriarch gave shiba to Gilgamesh, he shed his old, diseased skin like a snake, and emerged from it reborn.(42)

Persians also maintained the symbolic connections between menstrual blood and the serpent's secret of longevity.  Mithraists claimed immortality was conferred by the blood of the sacrificial bull, but a serpent was there to collect the blood as it flowed from the bull's body; and this blood was imitation-menstrual blood in that it was "delivered by the moon."(43)