Water Route Between Oceans in Nicaragua?

This is interesting, and seems feasible.

London, Feb 13 : An explorer claims to have found evidence of an ancient water route between the Atlantic and Pacific oceans, which existed hundreds of years before the Panama Canal was conceived.

Hailed by some as the eighth wonder of the world, the Panama Canal is a water passage between the Atlantic and Pacific.

Now, according to a report in The Times, Colonel John Blashford-Snell, an explorer, has claimed to have found evidence of another, more ancient, water route between the oceans — one that existed hundreds of years before the Panama Canal was conceived.

Several hundred miles to the north-west, in Nicaragua, the route — which involves rivers, a lake and flood plains — was discovered by Blashford-Snell, who was out on an expedition.

"With effort it is navigable. But it is going to need more investigation," said the veteran explorer.

He is now planning another expedition to discover whether it is really possible to take a boat from one coast to the other without touching land.

If so, it will prove something remarkable: that the ancient maps which show a passage between the two oceans — and which have long been dismissed as fanciful — had a greater claim to accuracy than was realised. 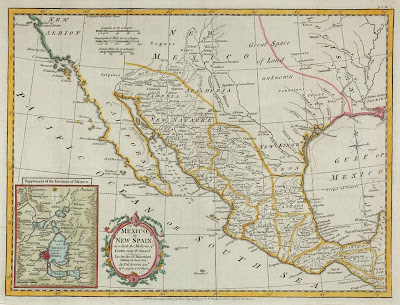 A 1774 map by Thomas Kitchin, for example, appears to show a channel that would allow boats to pass between the oceans. [Note: I could not locate a 1774 Kitchin map of Central America online, this one is dated 1777, from Altea Gallery.]

Colonel Blashford-Snell's expedition set out to find evidence that a canal once existed in Nicaragua.

No records of such a canal exist, although there were plans for a Nicaragua canal before the argument for Panama won the day.

Whether Colonel Blashford-Snell found evidence of ancient canals is arguable, but the case for a natural water passage is strong, according to the explorer.

Colonel Blashford-Snell, who spent two weeks in Nicaragua last month with a team of four, said he found places where the head waters of different river systems — one flowing east into the lake, another flowing west into the Pacific — were only a few hundred yards apart.

The seemingly unanswerable question, however, was how to get from one river to the other.

Then, by chance, he met a local fisherman who helped him to unlock the puzzle.

Mariano Hernandez told them he had made the journey from the centre of the isthmus between Lake Nicaragua and the Pacific down to the lake to go fishing — a journey made possible during the rainy season when the land turns into a lake up to 2m deep.