A Checkerboard-Patterned Stud and Gold Serpents

Part of the magnificent and unprecented find called the Staffordshire Hoard.

I have found references in several articles to five "mysterious" small gold serpents that archaeologists cannot figure out - what they mean, what they may have been a part of.  See, for instance, this comment from an Art Daily article:  Gems to be displayed for the first time include a delicate filigree gold horse’s head and gold snakes that have left experts baffled as to what they could have been used for . . . 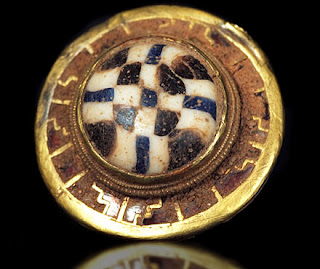 I wasn't able to locate a photograph online of any of these serpents.  I want to see the five little gold serpents!  Are they game pieces?  Pieces off a horse tackle?  Jewelry?

While searching for images of the serpents, I found this lovely little item from the Hoard, described as a millefiori stud.

Millefiori (literally "thousand flowers"), dates back to Roman times.  I wonder if the archaeologists will be able to pinpoint the date this lovely piece was created?  There is ongoing discussion about when the Hoard was put into the ground; and, of course, even if a date can be agreed upon for that event, individual items that make up the Hoard may be much older than 650-750 CE.

What a beautiful piece! And fascinating. For instance, notice the markings around the large inner border marked out in gold - not all of the lines are straight, and there is a distinct pattern in these lines, set at 90 degrees to each other, dividing the circle into four equal parts.

The inner-most pattern of the black/gold/white millefiori checkerboard pattern consists of a 3x3 square with curved edges to fit into the circular pattern; the outside frame increases the size of the "square" to 4x4.  I was reminded of the oldest magic square known in history - from ancient China, the Lo Shu magic square that sums to 15 in all directions.

The center of the Lo Shu is the number 5, and we are reminded of that number (the number of the sacred spiral seen repeatedly in nature) by the five black rectangles that make up center of the millefiori design; the number 5, which in Chinese lore is considered "masculine," is complemented by four white rectangles, four being an even number and therefore considered "feminine" by the Chinese.  Ultimately, though, the black/white checkerboard pattern is balanced to at - 8 white and 8 black, a perfect reflection of the ancient Taoist principle of yin/yang. 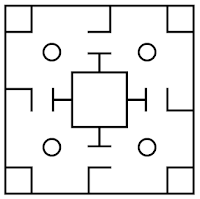 The overall design of the Staffordshire Hoard stud reminds me of an ancient Chinese boardgame - liubo.  I know it sounds crazy -but look at all of the elements of the millefiore stud and compare it to this standard liubo board configuration from Wikipedia commons.  The "V"s in the four corners, facing outward; the "L"s on the center of each of the four sides; and four "T"s centered around the perimeter of the innermost space.  This inner center space could well be the ancestor of the "palace" in the later game of xiang qi, and in some versions of the ancient liubo, was a pool where fish cavorted - a sacred pool, perhaps? It is not known what role the "fish" played in liubo, only that they were sometimes "caught." 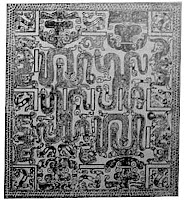 A c. 400 BCE serpent-overlaid liubo board.  You'll notice that the "V"s and the "L"s are there in their traditional places - but it's very hard to see any "T"s  amid the inner markings, although suggested by the twisting bodies of the numerous serpents and three horizontally-laid out grid marks.  Interesting.  A variation on a theme...

Just what are those markings on the inner border around the black and white checkered millefiore stud?  Could those possibly be representations of "L"s from a liubo board?
Posted by Jan at 9:51 PM