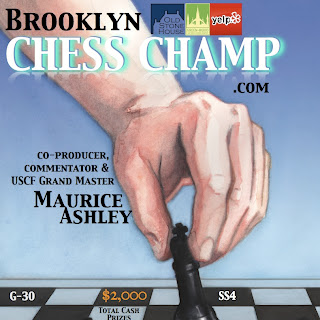 Forget the Round Table; Brooklyn Lyceum brings to the Borough of Kings - along with Rooks and Bishops - the Inaugural BROOKLYN CHESS CHAMPIONSHIP.

BROOKLYN CHESS CHAMPIONSHIP
Brooklyn Lyceum
February 27 and 28, 2010
USCF Sanctioned, up to $2000 in total prize monies. Ranked both Open and Scholastic.

Brooklyn, NY. -
The Lyceum, 100 year old former NYC Public Bath turned event space, steps up to help render unto Kings County what rightfully belongs here.... a Brooklyn Chess Championship to beat all others. This inaugural event will take place February 27th and 28th, 2010, with both open and scholastic competition. THREE CLASSIFICATIONS ON SUNDAY: u 1600 rankings, u 2000 rankings and OPEN. We invite players of all ages into our fold for a weekend of tournament play as well as related activities - like exhibitions, retail sales, and more TBA - to inspire and interest those who may or may not be in the know!

Be you a hopeful student with chess in your genes, a ranked player from Rockville, or a geek with a penchant for strategy, we want YOU. One right move and a check mate, and you could be on your way. Grandmaster is the highest title a chess player can attain aside from World Champion, and has been earned by prodigies as young as age 12.

Grandmaster Maurice Ashley, a Park Slope resident, is co-producing this competition. Ashley, the first African American to attain the title of International Grandmaster, is an ardent supporter of young people and has received multiple community service awards from city governments, universities, and non-profit groups for his work. His book, Chess for Success (2005), crystallizes his vision of using chess to help at-risk youth. Ashley is the world's premier and live chess commentator for ESPN and has appeared on The Charlie Rose Show, CBS News This Morning, National Public Radio, Today New York (W-NBC), CNN, Bloomberg Radio, and a number of radio shows around the U.S.

Saturday Feb 27: Ashley will challenge twelve lucky players to a round of 12 games at one time! Play against the best. TIME AND DETAILS TO BE ANNOUNCED.

Top games to be simulcast on our giant screen in the activities room via DGT boards.


Chess isn't just for retired gentlemen on boardwalks, or lining tree-lined paths of parks everywhere, although we could all learn a thing or two from them. It is a very popular sport - recognized by the International Olympic Committee - and remains an active presence in schools, homes, bars, clubs and colleges. Chess' fashionable beginnings are traced to 6th century India. Through the centuries, the game has made its way to North America via routes through Russia and Southern and Western Europe, morphing gradually into the game we know and love today.

Building on a string of high traffic conventions and festivals over the last few years, including KingCon, NYC Zine Fest, and our notable Craft Market series, the Brooklyn Lyceum steps up yet again to bring people of all ages and inclinations together in our cavernous space. A tournament like no other in New York, in a space like no other... so roll up your sleeves and tussle with some other Bishops of Brooklyn

About the Brooklyn Lyceum

The Brooklyn Lyceum, known formerly as NYC Public Bath No. 7, is a performing arts and cultural center in Park Slope. Originally opened in 1910 as an indoor bathing facility, it once housed the largest indoor public pool in the country. Reopened in 1994 as the Brooklyn Lyceum, the old bathhouse now plays host to a range of performance events, festivals and other cultural activities. The Lyceum Cafe is open to the public daily and offers free wireless access.

Brooklyn Lyceum
Deb Klein, marketing coordinator.
Email Deb
with all press inquiries or
call her: 917-405-9909
Posted by Jan at 6:52 PM