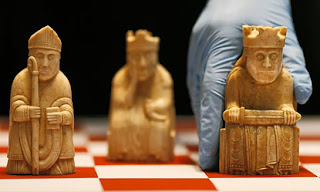 Politicians seemingly with nothing better to do, but it's really all about the money, so they'l never stop arguing...

The British Museum has been accused of “airbrushing” history after a poster campaign claimed the world famous Lewis Chessmen were from Norway, and failed to mention any connection to Scotland at all.

Angus MacNeil, the Nationalist MP for the Western Isles, wants the posters removed or the reference to Norway replaced by Lewis. Mr MacNeil, who has raised the issue at Westminster, described the promotional campaign as a “total cheek”.

The new dispute follows a longstanding debate over where the figures, most of which are in the British Museum in London, belong. The SNP believes they should be repatriated to Scotland, where they were found.

The posters, on display at London Underground stations, promote a new BBC Radio 4 series, A History of the World in 100 Objects, which explores the British Museum’s internationally renowned collection. Under an image of the chess set’s Queen are the words “AD 1150-1200 Norway”, despite ongoing disagreement over its origins.

Mr MacNeil — who has seen the posters at a number of stations — has laid an early day motion (EDM) before the Commons stating that “this House deplores the historical airbrushing of the Lewis Chessmen by the British Museum in a poster campaign”.

The EDM adds that it “further deplores the fact that references to Lewis or the Hebrides are nowhere to be seen; notes that the only thing certain about the chessmen, from the expansive European Norse society, is that they are made from walrus ivory or whale teeth and that they were found on the Isle of Lewis in 1831.”

“It is a total cheek and a fabrication of history,” said Mr MacNeil. “I am writing to the museum and I want the posters either removed or the word ‘Lewis’ inserted over ‘Norway’.

“There is no mention of Lewis, the Outer Hebrides or even Scotland on these posters — even though they are the Lewis Chessmen." The chess pieces were discovered in a sand dune near Uig on the Isle of Lewis in 1831. Although most historians believe the intricately carved figures were made in Norway and bound for Ireland, others have argued they could have been created in Scotland by a craftsman influenced by Viking art. Lewis was a part of the Norse Kingdom of Mann and the Isles between 1079 and 1266.

Many of the Lewis Chessmen — used as a model for a scene in a Harry Potter film — will be reunited for the first time for more than 150 years for a tour of Scotland starting in a few months. Entitled The Lewis Chessmen: Unmasked, the exhibition opens in Edinburgh in May, before travelling to Aberdeen, Shetland and then the Western Isles.

The British Museum has agreed that 25 of its 82 walrus ivory pieces can come up to Scotland to join the travelling exhibition with the 11 pieces held by the National Museum of Scotland in Edinburgh. Only part of the collection will come north because the British Museum regards the 12th century chessmen as one of its main visitor attractions.

The tour comes after the Scottish government sought the repatriation of the priceless figures. Former culture minister Linda Fabiani was sent to London to view the chessmen and make the public case, but museum chiefs turned down the request as it would lead to other demands for the return of artefacts. Unlike some of the British Museum’s controversial exhibits, such as the Elgin marbles, the chessmen were not plundered but bought for 80 guineas from an Edinburgh dealer, who himself had paid £30 for them.

A spokeswoman for the British Museum said: “It is generally accepted that the Chessmen were made in Norway, during this period the Western Isles, where the chessmen were buried, were part of the kingdom of Norway not Scotland.”
Posted by Jan at 8:24 PM