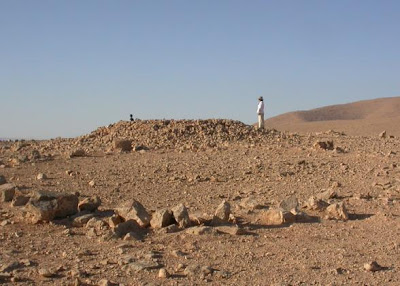 "Syrian Stonehenge" - an exciting discovery that needs to be thoroughly investigated (before the looters get there). At its oldest, it may be a couple thousand years older than the oldest part of Stonehenge in England.  We sure do have a lot to learn yet, don't we... (Photo courtesy Dr. Robert Mason. One of the corbelled stone structures found in the Syrian desert. Archaeologists suspect that its an ancient stone tomb. In the front of it are the remains of a stone circle.)

For Dr. Robert Mason, an archaeologist with the Royal Ontario Museum, it all began with a walk last summer. Mason conducts work at the Deir Mar Musa al-Habashi monastery, out in the Syrian Desert. Finds from the monastery, which is still in use today by monks, date mainly to the medieval period and include some beautiful frescoes.

Dr. Mason explains that he “went for a walk” into the eastern perimeter of the site - an area that hasn’t been explored by archaeologists. What he discovered is an ancient landscape of stone circles, stone alignments and what appear to be corbelled roof tombs. From stone tools found at the site, it’s likely that the features date to some point in the Middle East’s Neolithic Period – a broad stretch of time between roughly 8500 BC – 4300 BC.

It is thought that in Western Europe megalithic construction involving the use of stone only dates back as far as ca. 4500 BC. This means that the Syrian site could well be older than anything seen in Europe.

At a recent colloquium in Toronto, Canada, Mason described his shock at discovering the apparent tombs, stone circles and stone alignments: “I was standing up there thinking, oh dear me, I’ve wandered onto Salisbury Plain,”

At the southern end of the landscape there are three apparent tombs. They are about eight metres in diameter and each of them “actually has a chamber in the middle”. The roof is corbelled which suggests that beneath them is “something you would want to seal in.” Each of these corbelled structures had a stone circle beside it, which is about two meters in diameter.

Dr. Mason cautioned that the team did not have the chance to do more than survey the area, so it’s still possible that these corbelled structures could have a purpose other than burial. More work also needs to be done to get a precise date of construction.

Dr. Mason set out to look for more stone circles and chambered structures. This time he brought a monk with him, from the monastery:

“Lurking around in the hills above a Syrian military base with a digital camera in one hand and a GPS unit in the other is the sort of thing that makes you want to have a monk in your presence,” he explained.

The two of them went to a rock outcrop – a place that would have been a good source of flint in ancient times – where he found the remains of several corbelled structures. In the valley below they found another corbelled structure with a stone circle right beside it.

The monk who travelled with him sensed that this high outcrop would have been of great importance to the people who lived here. “This is a high place” he told Mason.

As Mason gazed at the landscape, from the height of the outcrop, he saw stone lines, also known as alignments, going off in different directions. Dr. Mason has a strong background in geology, and knew immediately that these could not be natural features.

“I know what rocks look like, where they belong - these rocks don’t belong in that.”

One of stone lines was “very bizarre,” snaking its way up a hill. Mason followed the line and found that it led to the “biggest complex of tombs of all.”

This particular stone structure has three chambers and was probably the burial place for “the most important person.” In the front of the tomb are the remains of a stone circle. Dr. Mason can’t confirm for sure that this was used as a tomb, until further archaeological work takes place.

The lithics the team found in the landscape are also quite unusual – they don’t seem to be made from local material. Mason explained that local flint is white or dark red, but the material they found is “very good quality brown chert.”

The Neolithic period is a time period when people in the Middle East were beginning to grow crops and adopt farming. They didn’t live in settlements larger than a village. There were no cities in the Middle East or anywhere else in the world.

Professor Edward Banning is a University of Toronto anthropology professor and Neolithic period expert, and has done extensive fieldwork in the Middle East, including Jordan. He said that we need to be careful about drawing conclusions before more fieldwork is done.

“Virtually all the burials that archaeologists have ever discovered from Neolithic sites in that part of the world come from inside settlements – in fact even below floors and houses,” he said. If the corbelled structures are confirmed as burial structures, then this site will represent something new.

“It’s possible that this landscape that Dr. Mason has identified could be an example of off-site burial practices in the Neolithic which would be very interesting.”

This would help settle a mystery that archaeologists have long faced. Banning said that while burials have been found in Neolithic settlements, “Those burials are not high enough in number to account for the number of people who must have died in those settlements. So a number of us for many years have assumed that there must have been off-site mortuary practices of some kind.”

Dr. Mason goes a step further. He says that this site “sounds like Western Europe” and he wonders if this could be an early example of the stone landscapes seen at places like Stonehenge.

Dr. Julian Siggers of the Royal Ontario Museum, another Neolithic specialist, pointed out that it has been argued that agriculture spread from the Near East to Europe. This find creates a question - could these stone landscapes have travelled with them? [Well - duh! Of course they did!  Connect the dots!]

“It’s such an important hypothesis if it’s right that it’s worth telling people about now,” said Mason. “We’ve found something that’s never been found in the Middle East before.”

Professor Banning is sceptical about this idea. He said that stone structures are found throughout the world, pointing to the dolmens found in East Asia. He claims that people in Western Europe could have developed the techniques independently of the people who built the landscape near the Deir Mar Musa al-Habashi monastery. [Here's the old argument of 'independent invention' versus 'diffusion.'  As if diffusion would take a kajillion years, instead of just a thousand, or a couple of hundred, along well known and well travelled ancient trade routes (both land and sea).  Geez!]

Prof. Banning also said that Mason’s site may not be entirely unique in the Near and Middle East. He said that archaeologists have detected, via satellite photos, what appear to be cairns and stone circles in other areas, including the deserts of Jordan and Israel. However, he admits that most of these things have not received a lot of archaeological investigation.

That situation is about to change. Dr. Mason plans to return to the Deir Mar Musa al-Habashi site this summer with a team of Neolithic experts. The results of their investigations may well put Britain’s Stonehenge in the shade.
Posted by Jan at 9:24 PM

This is so fascinating to read!

This is my first visit here, and while not knowing very much about chess, I found your archeology interests and articles fascinating. My art interests and photography lead me into this area. I'd love to travel to many of the areas you have discussed.

This kind of archaeology fascinates me. What truly amazes me is that this site that Dr. Mason discovered has evidently not been discovered by looters - yet. Looters cannot be far behind now that the site has been publicized. Even though the location was not given, someone will track down where Dr. Mason was at such and such time, and figure out where he took his walk.

The ongoing argument about "diffusion" versus "independent invention" is crucial to the history of ancient board games, which is a subject of great interest to me and my friends at www.goddesschess.com. It extends to so many areas of human endeavor: to writing; to agriculture; to weaving of cloth; to brewing of alcoholic beverages; and probably to the discovery of how to make fire!

Chess is a very old game that can confidently be dated to the 6th century CE; but, it incorporates so many archetypes that point to a much greater antiquity than current games historians are willing to stand for.

From the old to the new, my fascination is boundless. The archaeology of chess, the history of the goddess, the present plight of women in so many places in today's world, how female chessplayeers are faring in the never-ending march to gender-equality with their male counterparts - it's all of one piece to me!

Glad you enjoy the blog. I hope you'll continue to visit and comment in the future.