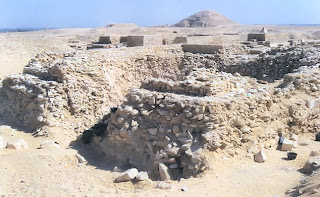 Isis sent me this report, that contains additional information, including this photograph. From discoverychannel.com.

Badly destroyed, the 33-by 16-foot burial chamber belonged to Queen Behenu, wife of either King Pepi I or Pepi II of the Sixth Dynasty.

It was discovered as sand was removed from Behenu's pyramid in South Saqqara, west of the pyramid of King Pepi I.

Although the mummy of the queen was destroyed and little remains of the burial, the team found two inner walls which contain hieroglyphics engraved on white stone known as the "Pyramid Texts."

The oldest body of Egyptian religious writings, Pyramid Texts were widely in use in royal tombs during the 5th and 6th Dynasties. They are basically special prayers to protect the dead and ensure sustenance in the afterlife.

Further excavation inside the burial, led the French team to the queen's sarcophagus.

"It is a well-preserved granite sarcophagus engraved with the queen's different titles, but says nothing about the identity of her husband," Philippe Collombert, head of the mission, said in a statement.

Since the beginning of their project in 1989, Collombert's team has located a total of seven pyramids belonging to queens dating to the reigns of Pepi I and Pepi II.

Pictures: courtesy of Supreme Council of Antiquities (SCA).
Posted by Jan at 8:18 PM