Ancient Writing: How the Alphabet Was Born from Hieroglyphs

So writes Orly Goldwasser in the March/April, 2010 issue of Biblical Archaeology Review. The entire article, with images and photographs, as well as two interesting sidebar features, are included at BAR's website, which I love to visit regularly because I never know what treasures I might find there.

Article. Traces the development of a unique form of written communication by foreign workers and settlers in Egypt - an alphabet - based exclusively on the sounds of syllables composing a single word. It's long but worth the read for anyone interested in the development of ancient writing and, in this case, an invention that we use in modified form to this very day! 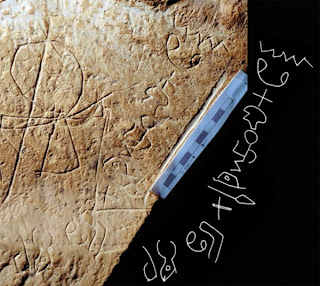 Sidebar: The Wadi el-Hôl Inscription: Earlier than Serabit?
Photograph by Bruce Zuckerman and Marilyn Lundberg, WS Research. Courtesy Department of Antiquities, Egypt.  The el Hôl inscription is faintly carved into a limestone wall. The inscription could be read “(The) besieger עוחי, ‘El’s Trickle.”

Sidebar: A Cuneiform Alphabet at Ugarit

DIFFERENT SCRIPT, SAME ALPHABET. This cuneiform clay tablet found at the ancient Syrian coastal city of Ugarit is in fact impressed with wedge-shaped alphabetic signs. Was the alphabet invented twice?
Posted by Jan at 7:31 PM