Record-Breaking Rain and More on the Way... 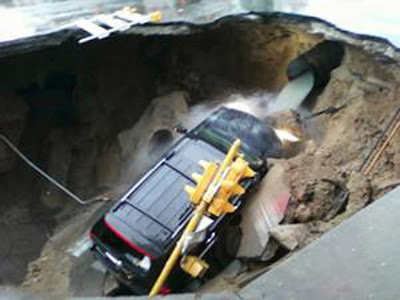 I've got two swimming pool areas in my backyard that aren't supposed to be there, because I don't have any inground pools!  That means we got at least 6 to 7 inches of rain yesterday.  It started raining by about 7:30 a.m. and except for brief respites between storm fronts, it hasn't stopped.  The heaviest rain started falling during rush hour, stranding people for hours as freeway underpasses flooded out; more roads got taken out as rivers and streams burst their banks.  Some parts of the city (downtown and to the north of where I am) got 7 inches of rain IN AN HOUR.  Here's a sinkhole that opened up during the storm at the intersection of North Oakland Avenue and East North Avenue on Milwaukee's site.  That's a Cadillac Escalade that became it's unfortunate victim and yeah, that's a gushing water main adding insult to injury.  Photo from JS Online, by Mark Pawlik.

Last night it was dashes into and out of the basement as the tornado sirens went off twice.  Lightning started fires all over the city; two people were struck by lightning while out walking.  Lightning terrifies me, and I was huddled wrapped in a blanket in a corner of the house as far away from windows as I could get, listening to the storm coverage on the television.  Fortunately I did not lose my electric power, so the sump pump did its job.  I don't have a FLOODED basement, but I do have standing water from seepage through the walls and around the floor.  What a mess.  I cleared out as much of the stuff stored in the basement as I could last night, in between tornado warnings, but no way could I get it all out by myself. 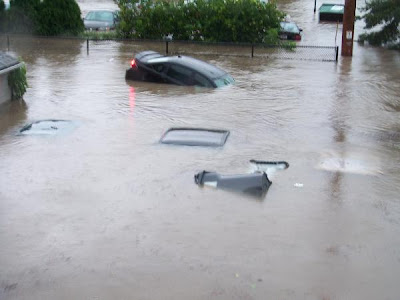 (Photo from JS Online, Adam Schroepfer, Otto's parking lot flooded, east side of Milwaukee).  Waves of heavy, pounding rain and non-stop strobe-like lightning continued on and off all night and early morning.  It's still raining out there, but not heavy right now, and the lightning flashes have subsided for the moment.  I'm debating whether to try and make it to the office.  The bus I take downtown (which itself sits in a river basin) has to travel through low areas and there is no way of knowing right now if the route has been flooded closed (no way around the low areas of the city).  I can't call anyone at the bus company to find out because the last round of county budget cuts fired all live operators who used to take calls from the public.  Now one is supposed to "check online" - but the website sucks and is rarely updated.  Gee thanks, County Executive Scott Walker.  Wish you'd get stuck in a sinkhole!

Great, just great - I just heard on the radio that most of the power outages in the area (last night it was some 25,000 people, this morning it's about 8,000) was caused by lightning strikes, not downed power lines due to wind.  In fact, except for the odd tornado here and there, there has been no wind.

Today the dew points will be in the 70's and the temperature a high of 88 F.  Plus the contant rain.  That desert down in Las Vegas is looking more and more tempting all the time...
Posted by Jan at 7:04 AM