Wood Henges Found on Opposite Sides of the Atlantic

First, article from the Guardian.co.uk: 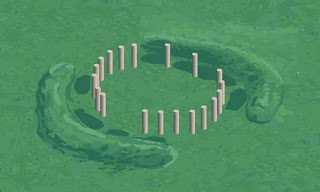 Without a sod of earth being dug up, a new henge, a circular ditch which probably enclosed a ring of timber posts and may have been used for feasting, has been discovered within sight of Stonehenge. (Image: An artist's impression of a structure discovered by archaeologists studying the land surrounding Stonehenge, Wiltshire)

Professor Vince Gaffney, of Birmingham university, described the discovery of the new monument, only 900 metres away and apparently contemporary to the 5,000-year-old stone circle, as the most exciting find at Stonehenge in a lifetime.

"This finding is remarkable. It will completely change the way we think about the landscape around Stonehenge.

"People have tended to think that as Stonehenge reached its peak, it was the paramount monument, existing in splendid isolation. This discovery is completely new and extremely important in how we understand Stonehenge and its landscape.

"Stonehenge is one of the most studied monuments on Earth but this demonstrates that there is still much more to be found."

Midsummer revellers coming to Stonehenge for the solstice have probably trampled unwittingly across the grass hiding the henge.

The henge was revealed within a fortnight of an international team beginning fieldwork on the three-year Stonehenge Hidden Landscape project, which aims to survey and map 14 sq km of the sacred landscape around the world's most famous prehistoric monument, which is studded with thousands more monuments from single standing stones to ploughed out burial mounds.

Amanda Chadburn, the archaeologist responsible for Stonehenge at English Heritage, said: "This new monument is part of a growing body of evidence which shows how important the summer and winter solstices were to the ancient peoples who built Stonehenge. The discovery is all the more remarkable given how much research there has been in the vicinity of Stonehenge, and emphasises the importance of continuing research within and around the world heritage site."

The survey suggests that the henge was on the same alignment as Stonehenge, and comprised a segmented ditch with north-east and south-west entrances, enclosing internal pits up to a metre in diameter believed to have held massive timbers.

For the last fortnight curious tourists have watched scientists trundling what look like large lawnmowers around the nearby field. The geophysical equipment can peer under the surface of the earth using techniques like ground-penetrating radar, revealing structures now invisible to the human eye.

The new discovery was hidden in the landscape: nothing remains above ground.

The international team includes scientists and archaeologists from Birmingham University, Bradford, St Andrews, and the Ludwig Boltzmann Institute for Virtual Archaeology in Austria, as well as teams from Germany, Norway and Sweden.

Professor Wolfgang Neubauer, director of the Ludwig Boltzmann Institute, said: "This is just the beginning. We will now map this monument using an array of technologies that will allow us to view this new discovery, and the landscape around it, in three dimensions. This marks a new departure for archaeologists and how they investigate the past."

The work of other teams suggests that timber and stone monuments were separate parts of the same Stonehenge story. Professor Mike Parker Pearson, an archaeologist who has been excavating for many seasons at Durrington Walls, another nearby timber henge site, has already suggested that timber henges and structures were associated with feasting for the living, and stone circles with the realms of the dead.

Work continues and the team expects to uncover many more secrets in the landscape.


And this article, from National Geographic News (sorry, I looked for but could not find an artist's rendition of Moorehead Circle - Woodhenge):

Just northeast of Cincinnati, Ohio, a sort of wooden Stonehenge is slowly emerging as archaeologists unearth increasing evidence of a 2,000-year-old ceremonial site.

Among their latest finds: Like Stonehenge, the Ohio timber circles were likely used to mark astronomical events such as the summer solstice.

Formally called Moorehead Circle but nicknamed "Woodhenge" by non-archaeologists, the site was once a leafless forest of wooden posts. Laid out in a peculiar pattern of concentric, but incomplete, rings, the site is about 200 feet (57 meters) wide. (See a picture of reconstructed timber circles near Stonehenge.)

Today only rock-filled postholes remain, surrounded by the enigmatic earthworks of Fort Ancient State Memorial (map). Some are thousands of feet long and all were built by Indians of the pre-agricultural Hopewell culture, the dominant culture in midwestern and eastern North America from about A.D. 1 to 900.

This year archaeologists began using computer models to analyze Moorehead Circle's layout and found that Ohio's Woodhenge may have even more in common with the United Kingdom's Stonehenge than thought—specifically, an apparently intentional astronomical alignment.

The software "allows us to stitch together various kinds of geographical data, including aerial photographs and excavation plans and even digital photographs," explained excavation leader Robert Riordan, an archaeologist at Wright State University in Dayton, Ohio.

The researchers had known, for example, that an opening in the rings; a nearby, human-made enclosure; stone mounds; and a gateway in a nearby earthen wall are all aligned.

But the model revealed that the alignment is such that, during the Northern Hemisphere's summer solstice—the longest day of the year—the sun appears to rise in the gateway, as seen from the center of the circle, Riordan said.

In much the same way, and on the same day, the sun appears to rise alongside Stonehenge's outlying Heel Stone, casting a beam on the monument's central altar.

About 10 inches (30 centimeters) across and up to three feet (one meter) deep, the holes are thought to have held posts made from stripped oaks, hickories, and other local trees, Riordan said.

Each post probably stood about 10 to 13 feet (3 to 4 meters) above ground, and some were spaced only a few inches apart.

At the center of the innermost circle is a patch of cleared earth filled with reddish, burned soil and hundreds of broken pottery fragments.

In 2007 Riordan and his team discovered a series of trenches filled with ash and clay and capped with gravel and soil.

The trenches' layout mimics the pattern of the long-gone posts. And as with the posts, Riordan said, "We have no idea what [the trenches] were built for."

For the ancient Ohioans, constructing Moorehead Circle would have been a significant undertaking.

"They would have had to dig these holes, go get the trees, cut them, strip them, and carry them in," Riordan said.

Workers would have had to carry limestone rocks from about a mile (1.6 kilometers) away and up a 250-foot (76-meter) hill. The rocks would have then been broken up and placed in the pits to help keep the posts upright.

Not even digging the postholes would have been easy. Lacking shovels or picks, the Hopewell people dug with bones and sharpened pieces of wood.

And for all their work, the circle's creators must have known their monument wasn't built to last. After about ten years the wooden posts would have been largely rotted and ripe for replacement, Riordan said.

"This was an elaborate construction," he added. "All the effort that went into constructing it suggests it was the ceremonial focus of Fort Ancient for a time."

Further information on Moorehead Circle
Posted by Jan at 9:03 PM