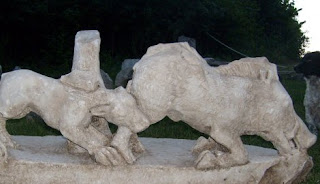 As ‘Blic’ learns unofficially, it is most likely a sculpture of Diana, the Goddess of the hunt. At the National Museum in Zajecar we were told that this discovery has been the most significant one since finding of archvault in 1984 with the inscription ‘Felix Romuliana’ and a head of Galerius in 1993.

It is supposed that the sculpture symbolizes victory by Rome over barberians. Unfortunately a fragment of the sculpture (a horse and a rider) is missing. The rider is believed to be Diana.

Experts claim that this discovery is absolutely precious for studying of the ‘Romuliana’, but for the world culture as well.

Huge interest of experts from all over the world is expected.

The German archeologists using geomagnetic and geophysics method of search outside the imperial palace have discovered about fifty objects. Recently a new three-year agreement on cooperation has been signed with the Institute in Frankfurt.

The ‘Felix Romuliana’ contains numerous floor mosaics and remains of monumental temples and buildings. The Portrait of Emperor Galerius, heads of Hercules and Jupiter, mosaic presentations of Dionis, Labyrinth and Venator are the very best of the Roman art of that time. 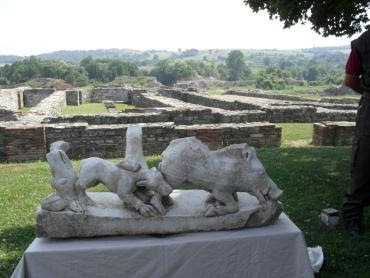 Here is a photo of the sculpture from a different perspective - it is a boar that the dog is bringing down, as was pointed out by Anthony in his comment, thank you.  A boar makes much more sense than a small horse, LOL, but I just did not see "boar" in the first photograph - it looked like a small horse with a mane, I did not see the tusks at all!  (Photo credit: Tanjug)

This article has some more information about the sculpture:

The sculpture is believed to be representing Diana, the Roman goddess of the hunt.

Serbian archaeologists and their German colleagues worked on the dig near the town of Zaječar, daily Blic reports, and adds the discovery is nothing short of "sensational", and unique in the Balkans.

The marble statue was found north of the Emperor's Palace location - a settlement that was built before Romuliana itself.

The Zaječar National Museum said that the find ranks among the most important since the 1984 discovery of a tabled with the words Felix Romuliana inscribed on it.

The Roman palace on that location was built from 297 until 311 AD.

The sculpture, believed to have been made to celebrate Roman victories over barbarians, shows a wild boar pierced with a spear, a hunting dog at one of its legs, and two horse hoofs. However, the horse itself and the rider - that archaeologists believe would have been Diana - are missing.
Posted by Jan at 10:23 PM

Looks to me from that single picture, that it's a dog bringing down not a horse, but a boar - note the tusks and bristles along the spine.

It also looks to me like a horse's leg, broken off, just behind where the dog is biting the boar's leg. This would, at the least, make it a hunting scene. I don't know what's not in the picture, either, but there may be some text or other similar pointers to it being Diana that should be the rider of said horse.

Thanks, Anthony. That is supposed to be a boar? Perhaps a better photo would help, I'll see if I can find one. Do boars have such long legs?

Hola! I did locate a better photograph of the sculpture: http://www.b92.net/eng/news/society-article.php?yyyy=2010&mm=07&dd=21&nav_id=68573
and will place it in the main post as a second photo for comparison. Yes, in the second photo it is clear to see it is definitely a boar. Thanks for your comment that put me on the right path.