It was hard to leave the beautiful city of Madrid and it's equally beautiful weather and kind people, but I won't lie, it's good to be back home in my own soft bed with my own soft down pillows and down blanket!

Both Mr. Don and I are attempting to fight off some kind of viral invasion affecting our throats and sinuses.  Ach!  And I was so careful this trip, too, to wash my hands frequently, tried not to touch my face and used hand disinfectant and the little hand towels that come with the meals on the airplane...

It is now time to take down the Christmas decorations.  Tomorrow the ladies of the investment club are coming over and I have no doubt we will spend the entire time drinking coffee and looking at the photographs and videos that I and Mr. D took of Madrid and Toledo!  So beautiful!

But chess - and life - go on.  We have not been standing still.  Even while in Madrid, emails were flying back and forth.  Tonight I emailed off the second article in a series of articles about Goddesschess for 'Echec, a chess magazine published by the (in English) Quebec Chess Federation.  The website is www.fqechecs.qc.ca.  Normally the Federation does not publish articles from the magazine at the website.  However, the August, 2012 calendar is in place and the 2012 Goddesschess Canadian Women's Chess Championship is on it - from August 4 - 11, 2012.  Yippee!

There is a dedicated website where you can find out more about the 2012 Goddesschess Canadian Women's Chess Championship.   We are hoping to see a good turnout of female chessplayers for this great event, the winner of which will earn an expenses paid trip to the 2012 FIDE Women's World Chess Championship as Canada's female representative.

Our sponsorship for this event is in its infancy.  We are hoping for a great turnout of female players and to grow our sponsorship and this championship in the years to come.

Trying to attach the article as a PDF didn't work.  Let's see if the photo scans of the 2-page article works.  Hopefully, you will be able to click on them to enlarge them to readable size and, if you can read Canadian French, you can read all about the beginnings of Goddesschess! 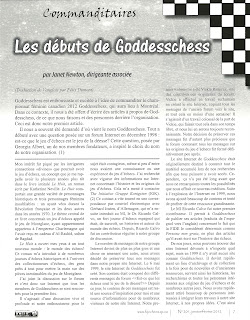 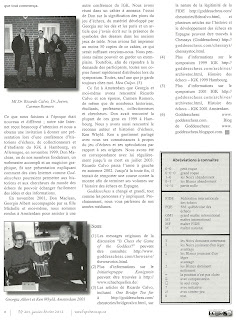