A Sunday in Madrid

Sunday was another beautiful day in Madrid.  We had originally planned to have a leisurely day and stroll up (down?) the Gran Via, in keeping with the Madrid tradition of taking it slow and easy on Sunday, when many businesses are closed and families flood the city streets in the late afternoon.
One of our original plans upon arrival in Spain was to take a day trip to Toledo.  Saturday evening during supper we had tentatively planned to visit Atocha Station and get information on buses to/from Toledo for Monday, January 8, our last day in Madrid.

But, once we got back to the hotel, I thought I'd do some checking online for guided tours.  I thought that it sure would be nice to have an English speaking guide who could tell us something about what it was we were seeing...

I found Julia Travel at a reasonable cost of 70 euros per person for a "full-day" tour.  I found other more expensive tours, as well.

The next morning I mentioned Julia Travel to Mr. Don and after some discussion we decided to book a tour with Julia Travel, which we did after getting back to my hotel room after breakfast.  Little did we realize, though, until AFTER we received email confirmation of our booking, that we were required to present a PRINTED VOUCHER as evidence of our booking.  It was either that or present a barcode on a cell phone.  Well, neither Mr. Don nor I own cell phones!  It wasn't possible to present a cell phone with a barcode.

How hard could it possibly be, we reasoned, to find a place in Madrid with a printer to print out the needed voucher?

My first shock in doing an internet search for a nearby internet cafe was that not many exist in Madrid - at least, not many that we could easily reach!  I did, however, find one that was within reasonable walking distance, and so in due course Mr. D and I headed out toward our destination.  On the way, near the Fountain of Cybele, he said let's stop at the information booth (for Madrid tourism) and we did.  The young man in the booth was very helpful and fluent in English.  He gave us the name and address of another place not too far away from the Outlook Bar where we were headed (off Gran Via some blocks) and so we had two places to go.

We headed off on the Gran Via.

It is a Grand Way, indeed.  So many of the buildings are incredibly beautiful and the street is crowded with different kinds of shops, theatres, banks, metro entrances/exits and lots of people!  We had a new map furnished by the helpful gentleman from the Tourist Info Booth, and we were looking for street names.  What happens with a lot of maps, though, is that not all the zigs and zags of streets are shown in detail on these maps.  You may see a street that says Calle A when you are looking for Calle B.  The problem is that Calle B is a block north and one zig from Calle A.  But unless you walk up Calle A, you won't know it.  But who in their right mind would walk up Calle A to find Calle B when the map doesn't indicate Calle B?  The entire city is like this! Hundreds of little lanes and alleys that are there in reality but not marked on a map.  The maps are - not very good, let's put it that way...

Some photos that we couldn't resist taking along the Gran Via: 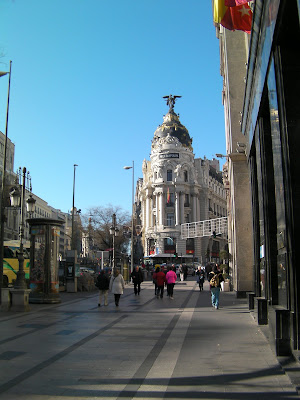 Toward the Metropolis Hotel, taken by Mr. Don (I think). 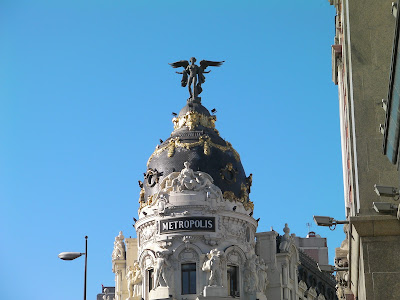 A close-up of the Winged Victory sculpture at the top of the Metropolis, taken by Mr. Don. 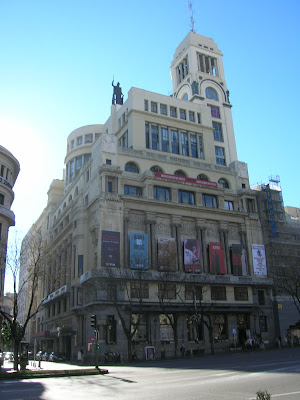 This building really caught me, and I took this and a few other photos of it.  I don't know what this building is, but Mr. D and I had quite a discussion about it.  He thought it represented an "add on" top at some later date to an already-constructed building, while I thought it was deliberately designed that way to make it look like the top stories and tower structures were added at a later date.  It seems Art Deco era to me, but I'm no expert, that's for sure!  At present the building appears to be home to a number of different arts groups. 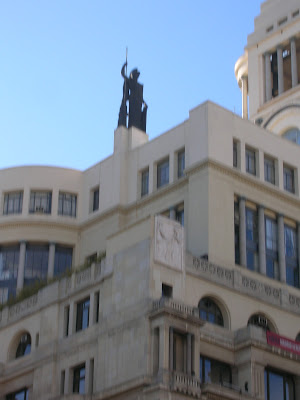 I tried to get a zoom of the sculpture at the top of the building, but it didn't come out very clear. 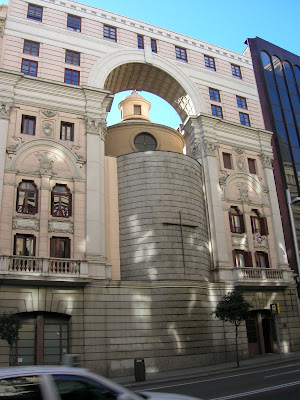 Check this out - a building built around a church! 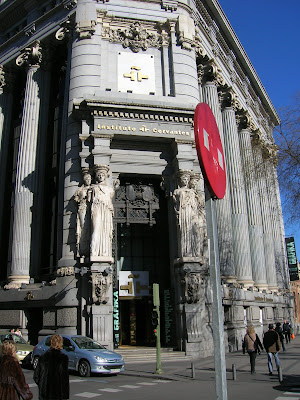 Another gorgeous building on the Gran Via.  Check out the chicks creating a collanade around the massive doorway.

Well, we walked to and fro, and when we realized we'd walked too far "to," we walked back to "fro."  Eventually we ended up down the right little alley only to discover that the Outlook Bar was out of business.  We then did a little back-tracking and discovered that the second place on our list (the one given to us by the information officer in the Madrid Tourist kiosk) was still in business - but closed on a Sunday.  In fact, every single place we passed that had anything to do with electronics or offered fax services, etc., was closed.

At this point we'd been walking for at least 3 hours, eyes peeled for any open electronics place all along.  I was totally discouraged.  It didn't seem likely no matter where we were able to walk to within our "zone" that we would find a business open.  Mr. D said okay, let's try a hotel.  He was just going to walk in and ask if we could use a printer because we had an emergency situation.  I said well, it's not really an emergency situation.  I suppose that's splitting hairs but I just was really against that idea and I dissuaded him from it (thank Goddess!)  I don't remember if it was he who suggested it, or me, but we ended up at the James Joyce Irish Pub because we figured at least someone there would speak pretty good English and might be able to point us in a good direction.  We were grasping at straws at that point!

Please see the prior post for information about the James Joyce Irish Pub.  The bartender there was a darling and I would have been perfectly willing to go back at 4:00 p.m. after he had got past his busy time, when he said he'd be able to print out for us whatever we needed.

As it turned out, though, after we got back to the Hostal Gonzalo the lovely older woman we had seen around who is, I think, connected to the family ownership of the business in some way, was there.  She doesn't speak any English and we don't speak any Spanish, despite Mr. Don's claims that he "understands" what some people say to us in Spanish.  Hmmm......

Anyway, we have a "conversation" of sorts.  Mr. Don says blah blah blah.  She just looks confused.  I say to the lady in slow English, hoping for the best, WE NEED A PRINTER.  She nods and motions for us to follow her.  We go toward a room that is a sort of kitchen and laundry room combined, where she whips out a cell phone and calls someone.  Rapid-fire Spanish and then she hands the phone to Mr. Don and says the name of one of our English-speaking hosts.  Thank Goddess!

A conversation ensues between Mr. Don and Javier, one of our hosts.  Then Mr. D hands the phone back to the lady, and more rapid fire Spanish conversation.  The upshot is that we are shown to a room right next store, a small office, and there is a computer, already turned on, connected to a small printer!  Hooray!

Now, figuring out the keyboard which had a rather different configuration when it came to the symbols and such than anything I've ever seen on American computers -- that is a story in and of itself -- but suffice to say that with some giggling, a lot of frustration, and much concentration, me at the keyboard (I'm a much better typist than Mr. D) and with the assistance of my trusty little Acer notebook handily kept in my large purse and pulled out because I could easily access on it the email that contained the url to the website we needed  -- with Mr. Don and his keener eyes reading the confirmation I'd received that contained the url that held the documented we needed to print, I was able to input the correct url for the website.  The document printed out on A4 size paper as we both crossed our hearts, eyes and fingers.  It worked!  I carefully folded it and put it in my purse for safekeeping, and we were good to go.  It only took - I have no idea.  It felt like a long time, and the lady came by a few times to check on our progress.  It may have seemed as if we were trying to break into a bank vault or something.  I can just imagine how we looked, me with my hair all a mess and my glasses dangling down the end of my nose, Mr. Don hovering over me, my little Acer notebook off to the side --

We thanked the Senhora (I probably have it spelled wrong) profusely for her assistance and went to our respective hotel rooms.  I don't know what Mr. D did.  I just collapsed on my hard little bed and tried to get some sleep for a few hours before we headed out for supper and the Giants-Falcons game that I knew the James Joyce Irish Pub would be showing later.

At any rate, we were all set for a full-day tour of Toledo on the following day!
Posted by Jan at 8:39 PM