Incredible as it seems, less than 48 hours ago Mr. D and I were coatless, sitting on lawn chairs on the back deck sipping wine coolers in the warm January sun!

Mr. D left yesterday morning for home and fortunately his flights were not delayed by the weather.  They went smoothly.  However, once he got home, he had a very long commute, snarled by SNOW!  He writes that it took three times as long as usual for the commute from the airport to his place.  Oy!  But now he is back home safe and sound.

I was up at 5:30 a.m. yesterday and after he left, about 8 a.m. I zonked out in the recliner and woke up at 10 to the first significant snow of the season: 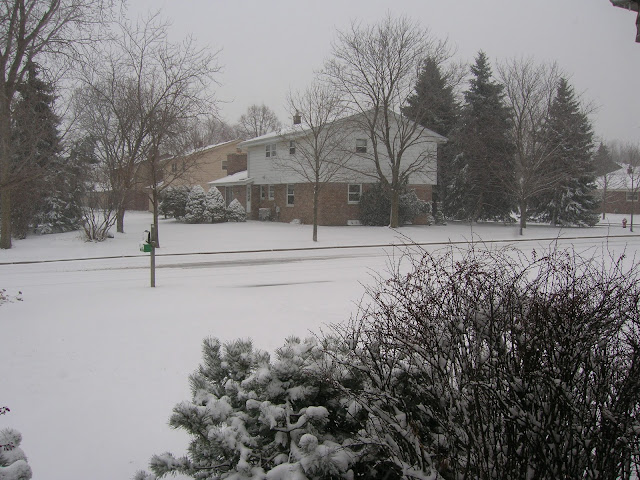 As per usual, there was a lot of drifting around my front porch and especially in front of the garage door.  The snow removal crew did a lousy job of plowing too. 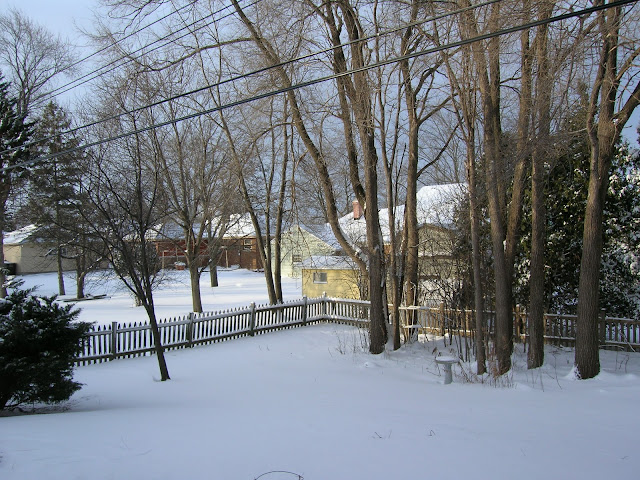 View out the back patio door early this morning; the sun was still out.  It has since clouded over. 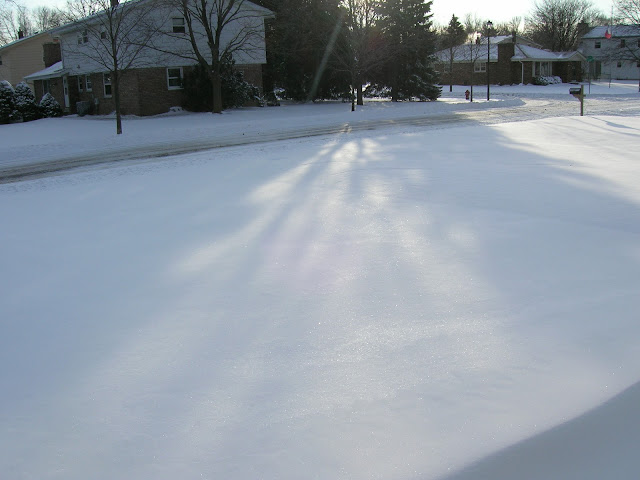 Look ma, no driveway!  View out the front door early this morning - the sun was so pretty.  It was still out for awhile when I first started shovelling my way toward the road from the front porch.

Some 45 minutes later and two passes with the shovel, this is the result: 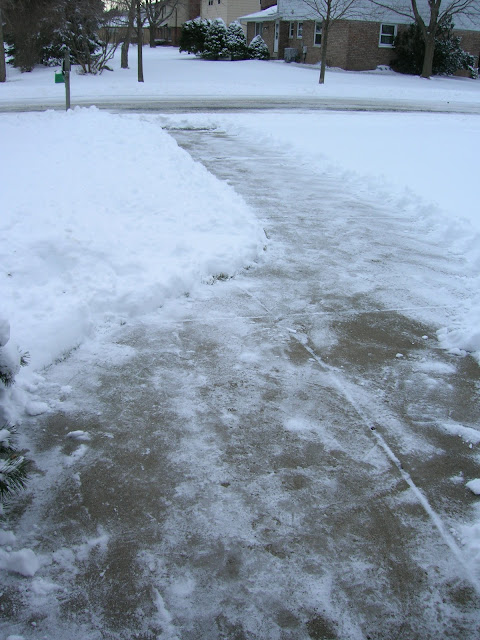 Just taking a rest right now, before going back out to do another pass or two. I've got a lot of snow yet to remove.  There's an ice glaze underneath the snow.  If the sun had stayed it would have melted and evaporated away.  Unfortunately, that won't happen now with the thick cloud cover that's come over.  I wouldn't mind this all so much if it hadn't turned so cold.  There's a minus 5F windchill today, thanks to the winds.  Time to pull out the heavy duty down coat and mittens.  Yech.  Two days ago, 56 degrees F and the sun was burning through my jeans as I sat on the deck soaking it all in!  Today, shivering cold, and it feels cold inside, too.  Blech.

The ground still hasn't frozen here - we haven't had a consistent streak of well below freezing weather this season!  So hopefully in 4 or 5 days when the temperatures begin to moderate again, all of this will just melt away - and we won't get any more for the rest of the winter!  It will, however, be cold at Legendary Lambeau Field on Sunday for the important Packers v. Giants game.  No more 40 degrees F.  Sigh.

Now I need to go remove some more ornaments from the Christmas tree.  Yes, it's that time, taking down the decorations and the tree.  The family room and dinette have already been stripped bare.  It looks empty and plain in here now...
Posted by Jan at 10:18 AM