Continuation of photographs from the Cathedral of Toledo: 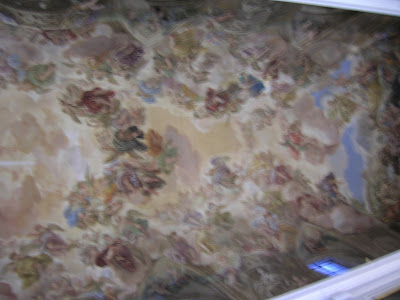 A view of the ceiling in the Refrectory - the priests' private domain. Unfortunately, my photo did not come out very clear, it is blurry.  Our guide told us this is the room where they changed into their robes to perform their priestly duties in the Cathedral.  I do not recall the name of the artist who painted the ceiling, but I believe he was an Italian master.  It is, to put it bluntly, Life in Heaven 101. 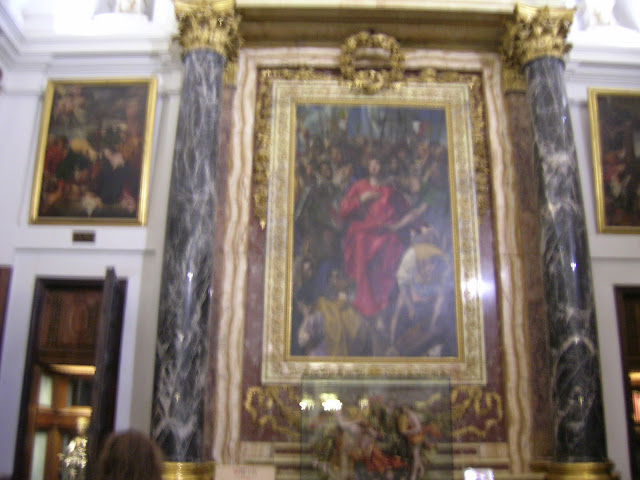 A not very clear shot of an El Greco masterpiece in the Refrectory.  It depicts Jesus Christ just before his robe is stripped from him in preparation for his crucifixion. 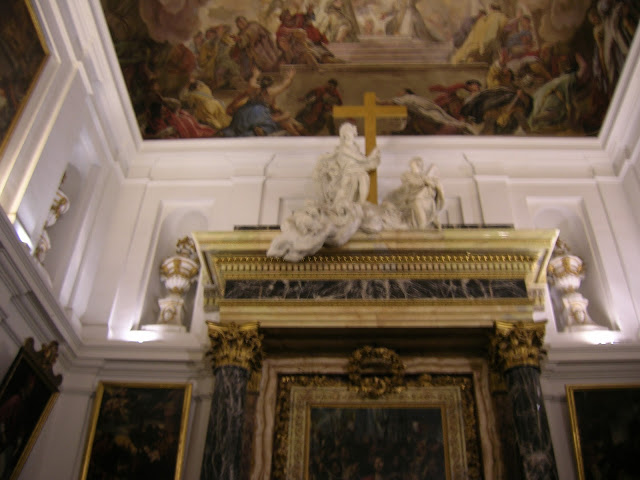 This much clearer photo shows the very top part, the "crown," per se, of the El Greco painting, which is a wonderful work of art in its own right.  Check out the vases on either side and following around the corners, too.  Wow!  This photo also gives you a clearer indication of the room-spanning painting I call "Life in Heaven 101" on the Refrectory's ceiling! 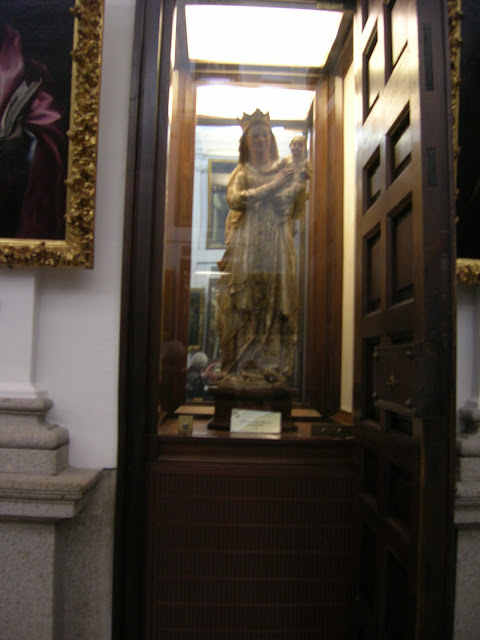 I do not know who this Madonna is, but she was inside the Refrectory, and she was encased in glass, so I figured she was important.  She was not shown in our tour.  In a Cathedral of this size, we saw several Madonnas.  I was not able to get photographs of all of them, unfortunately, as we often passed by so quickly and I did not want to lose the group!  If you look very closely in the lower left hand corner, you will see a reflection in the mirrored back of the case enclosing the Madonna.  That is Mr. Don! 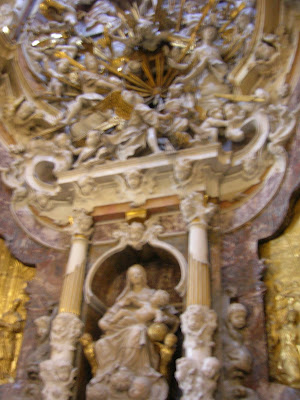 Here is another gloriously beautiful Madonna, from the 17th century.  She is alabaster, marble, and bronze (that is not gold, but it looks like gold).  My photo is not the clearest, unfortunately.  Damn!  The entire construct around her was so massive, there was no way for me to get her into a single photo.  I wanted, however, to get that "sunburst" of bronze "rays" in the upper center part of the photo because that is actually a "window" that overlooks a chapel behind the wall.  Natural light is provided into the chapel through this window by another "window" that was chiseled out of the Cathedral structure, way way up in the roof!  I was not able to get a decent photo of it, but Mr. Don did: 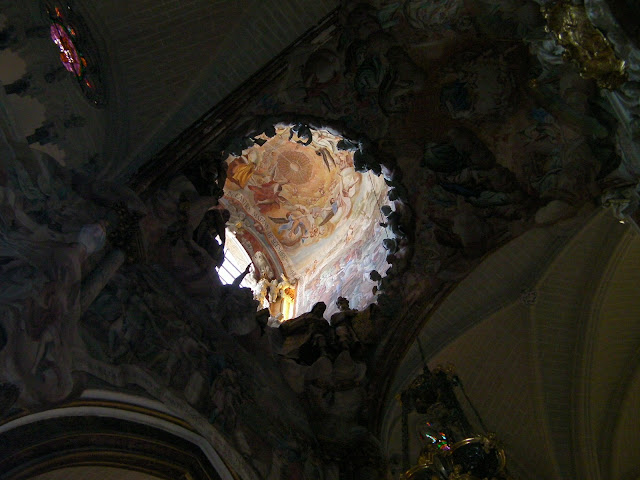 I mean, really!  Check this incredible photo out!  Light from this 17th century "window" pours into the opening above the Madonna below (see photo, above) into the chapel that is on the other side of the wall.  I asked our guide if it provides enough light to see by and she said oh yes, it does.  And so look at what the artisans did to "camoflauge" the hole/window!  Absolutely breathaking.  They sculpted an entire gallery of saints and apostles to make them look like they'd always been there as well as the window!  And in the "window well" above, spectacular three-dimensional paintings were added!

The chapel that got this light was not part of our tour but we did walk past a side of it (enclosed partially in glass and wrought-iron fencing) on our way to the main entrance/exit.  It is a a nicely-sized area (it seemed to be built on the golden mean proportions) and was very well lit.

On the wall opposite where we walked by, some important religious who-do's coffin is showcased! He, our guide told us, was an advisor to kings and queens during his long life. One of his fans (a queen) put his coffin up on the equivalent of stilts on the side wall of this chapel after he died. 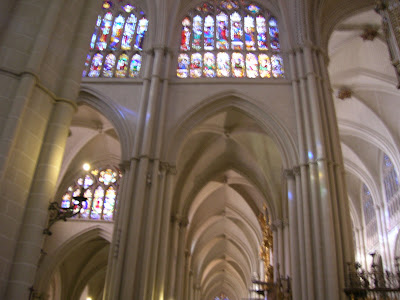 I don't even know in which direction I was facing when I took this photo, but it was the last interior shot I took.  Look!  An electric light bulb on the left!  Wowsers!  How did that get there?
Posted by Jan at 11:08 PM