Prepare for culture shock when you walk into the James Joyce Irish Pub on Calle Acala in Madrid.  Here is a blurb from the Pub's website (the English-language version):

Located beside Plaza de la Cibeles, The James Joyce offers an authentic Irish atmosphere with Irish staff. The cuisine is a combination of the best that both Ireland and Spain have to offer.
To add to the "craíc", we have live music as well as live sport on 3 big screens.

Prior to being The James Joyce Irish Pub, the Café Lion could be found in this location, one of Madrid's oldest and most famous cafés. For this reason, we have maintained and incorporated this history into the structure and atmosphere of the pub.

It is ear-splitting loud, with English-language rock music blaring from speakers throughout the premises.  The decor is sort of old-world dark-wood with comfortable chairs and slightly tottering tables along with a substantial bar and large screen t.v.s  (the one in the back above the stairway to the lower level is nothing more than a sheet upon which an image is projected, but it works - somehow!) and reminded me much of McLean's Pub in Montreal where Mr. D and I spent many pleasant hours in days of yore. 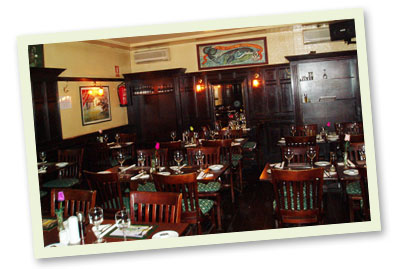 We had good meals the two times we visited the Pub, on Saturday and Sunday evenings.  On Saturday we both ordered club sandwiches and they arrived a short time later fresh with the meat warm and the tomatoes and lettuce cold, and the toast done just right. Mayo and ketchup are provided on the tables in packets, so you add your own as you go. There were side salads too - damn, it tasted SOOOOOO good, with iceberg lettuce, green and red pepper slices, tomatoes, carrots, and other mixed greens in a vinegar/oil dressing.  YUM!  I enjoyed rocking out to the very loud music while listening to the clientele (packed around the bar area) shouting along to the music in "English" (some of it was rather dodgy English, which made it all the much more fun to hear).  It was an eclectic music selection.  Some of the songs I had no idea of the tune or who was singing, but others I recognized, including Brittney Spears' big hit "Hit Me Baby One More Time."  To Mr. Don's utter bemusement I sang that song nearly word for word (it's been a long time) and he wondered how could I possibly know such a tune.  Suffice to say there is a lot Mr. D doesn't know about me.

The wavy sheet tacked into the wall above our heads/table showed a highly popular soccer match between MAD (Team Madrid) and GRA (Team Granada).  MAD won by a huge score of 5-1.  We were close to the "screen" but I was able to see it clearly; Mr. D had to turn his chair out away from the table to get a view, but not very far.  We had a lot of fun.

We returned the following night (Sunday) to watch the Giants/Falcons NFL football game.  I ordered the Shepherd's Pie, which was very good but I did not eat some of the mashed potatoes on top.  They were delicious but there was just too much!  Again, a nice side salad accompanied and it was so refreshing to have fresh veggies to eat, a nice light counterpart to a heavy meal. Fresh baked crusty bread also accompanied this meal, with butter that almost tasted like real butter.  I had eaten far too much heavy food in Madrid, or so it felt to my tummy.  (The scale proved me right, I gained a good 3 pounds after losing the water weight I'd gained over the week we were travelling and I was not taking my half a water pill each morning.  One cannot be constantly tromping about touring the city with no ready access to a toilet and take a water pill at the same time!)  I do not remember what Mr. D had for supper that night, but he cleared his plate, so it must have been very good.

We had different waitresses both nights but the service was excellent during both of our visits and no one came to "edge us out" to leave or turn over the table once we finished eating.  We felt very welcome to linger and enjoy the bottle of wine we'd ordered both nights and watch the games on the big screens.  It was lovely!  Loud, but lovely.

Special kudos go to an unnamed bartender at the Pub that we visited about 2:00 p.m. Sunday afternoon in a fit of desperation (after having tromped up and down the Grand Via and ways inbetween) when we were looking for an internet cafe with a printer to print out some vouchers that we needed for our day-trip to Toledo the following day!  Not only did he speak flawless English (with a lovely accent), he said he'd be able to help us and would print out whatever we needed if we came back about 4 p.m. after he'd finished serving a group of 20 who were due in at any minute for a big soccer game that was about to go up on the big screen.  As it turned out, in the meantime we got what we needed printed out at the Hostal Gonzalo through a series of broken English conversations with one of the family members on site who was there doing laundry and cleaning who used her cell phone to contact an English speaking host who then spoke with Mr. Don and well, did I mention they are just excellent hosts? - and so we did not need to return to the James Joyce Irish Pub at 4:00 p.m.  We returned at about 8:00 p.m. instead, for supper.  We were able to use the Hostal Gonzalo's computer and printer, with some effort (the keyboards were very different when it came to things like the "at" symbol, for instance!  Who knew?  I sure didn't!) to eventually print out what we needed, much to our relief.