Ancient Games: Mehen, the Game of the Serpent 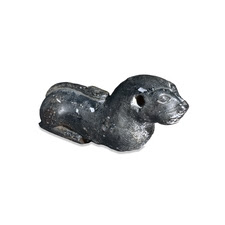 From the British Museum:
Ivory gaming piece in the shape of a lion
From a tomb close to the complex of Djer at Abydos, Egypt1st Dynasty, around 3000 BC
How was the 'serpent game' played?
Board games were a very popular pastime in ancient Egypt. The most famous of these games was senet. This game is often depicted in tombs and boards were often included among the personal items of the wealthy.
Several examples were found in the tomb of Tutankhamun.
Senet was not the only game played by the ancient Egyptians, though it is the only one that the rules are known for. One of the earliest games to be depicted is the so-called serpent game. Evidence of this game has been found in tombs dating from the earliest dynasties of the Old Kingdom (about 2613-2160 BC). It was played on a circular board on which a coiled snake was shown, with the body divided into boxes. The gaming pieces consisted of marbles, often inscribed, and lions like this one, but it is not clear how the pieces were used. In a tomb scene of a pair of men playing the serpent game, captions suggest that the game involved the use of strategy, and that part of the game was to capture something, perhaps the opponent's pieces.
The base of this lion gaming piece is worn, probably from sliding it across the board. Some of the incised decoration of the figure is also worn, from being held in the hand during play.
W.M.F. Petrie, The royal tombs of the earlies (London, 1901)
E.R. Russmann, Eternal Egypt: masterworks of (University of California Press, 2001)
A.J. Spencer, Catalogue of Egyptian antiqu-4 (London, The British Museum Press, 1980)
A.F. Shore, 'A 'serpent-board' from Egypt', The British Museum Quarterly-2, 26 (1962)
Posted by Jan at 4:42 PM