Stolen Antiquity To Be Returned To Italy 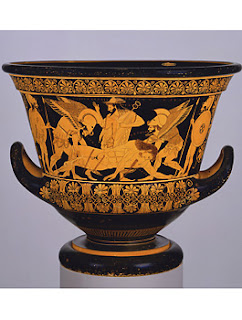 From The International Tribune

INSIDE ART
Ciao to a Met prize returning to Italy
By Carol Vogel
Published: January 11, 2008

In the coda to a long tug of war, the Metropolitan Museum of Art is bidding goodbye to the Euphronios krater, a 2,500-year-old vessel that has been a showpiece of its collection for more than three decades. Sunday is the last viewing day.
The krater, a Greek bowl for mixing water and wine, will be sent to Italy as part of an agreement reached nearly two years ago with that country's government, which has long contended that the artifact was illegally excavated from a tomb in Cerveteri, near Rome. The Met bought the krater in 1972 for $1 million from Robert Hecht, an antiquities dealer who is now on trial in Rome on charges of conspiring to traffic in looted artifacts. ( Hecht denies the charges.)
Under the terms of the pact, the Met is returning 21 objects that Italy said were looted, and the Italian government is lending the Met a series of rare ceramic antiquities. The first arrived in late 2006, and three more are to be installed by Wednesday in the Met's Greek and Roman galleries.
Two of the newly lent pieces have direct connections to the krater, which was painted by the Greek artisan Euphronios. A 26-inch-wide terra-cotta cup depicting an assembly of the Greek gods on Mount Olympus is signed by Euxitheos, a potter who also signed the Euphronios krater. A jug shaped like a woman's head was made by the potter Charinos, who is believed to have worked in Euphronios' workshop.
The third piece of ceramic art going on display next week, a krater made in southern Italy during the fourth century BC, is decorated with a spoof of one of the most serious episodes in Greek drama: Oedipus solving the riddle of the Sphinx.
The departing krater is to go on view later this month at the Quirinale, the presidential palace in Rome, where a show of other objects repatriated from foreign museums opened last month.
In a telephone interview on Thursday, Philippe de Montebello, the Met's director, praised the quality of the loan to the Met. "At the time during which the negotiations were under way, I brought a list prepared by the curators of the kinds of things we considered equivalents," he said. "We expected one object, but got three very beautiful objects. It shows on what a firm footing our future collaborations with Italy will be."
Montebello, who on Tuesday announced his retirement later this year, was asked whether he felt particularly emotional about the krater's departure.
Speaking from a cellphone, he said, "I can't hear you anymore" — a response he has occasionally deployed by land line to questions he would rather not answer.
Posted by Jan at 9:22 PM