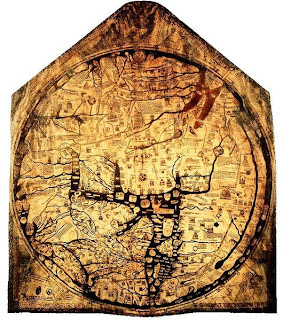 Not to be confused with the Axis Mundi, but just as there are many axis mundi (what's the Latin plural for mundi???), there are also several Mappa Mundi - which is fascinating in and of itself. A Google search under "Mappa Mundi" and then clicking on "Images" reveals an amazing richness of the medieval maps.

The Mappa Mundi is unique in Britain's heritage - an outstanding treasure of the medieval age which reveals how 13th century scholars interpreted the world in spiritual and geographical terms. The map is undated but bears the name of "Richard de Haldingham e de Lafford", whom some historians have identified as Richard de Bello, Prebendary of Lafford in the diocese of Lincoln during the late 13th century. Together with evidence interpreted from the content of the map, a date of around AD 1290 is considered reliable.

Construction
The Mappa Mundi was drawn on a sheet of vellum 64 x 54 inches, supported by an oak frame, with the actual map contained within a circle 52 inches in diameter. Most of the writing was with black ink, with red and gold leaf used for emphasis, and blue or green for rivers and seas . The Red Sea however, was depicted in red. Mountain ranges were indicated by scalloped designs and towns by walls and towers.

Maps like the Mappa Mundi were produced in considerable numbers throughout the medieval period in "studios" dedicated to that purpose. A number of monks would have worked under a master such as Richard of Haldingham, making numerous copies of this and other manuscripts used by the Church for tuition.

Derivation
The map projection followed a convention derived from Roman times in which all parts of the known world were represented in relation to Rome. As was appropriate to the time, the Mappa Mundi world was similarly circular, but with Jerusalem at the centre. The map was based on the writings of Orosius, a scholar of the fifth century AD and a pupil of Saint Augustine, who wrote a great work to confute the pagans. The seventh book of the Ormesta, as it was known, contained a description of the world and the Mappa Mundi was intended to illustrate this "summa", or compendium of knowledge. This is indicated by the title in the right hand corner, "Descriptio Orosii de Ornesta [Ormesta] Mundi Sicut Ostenditur", which translated means Orosius' History of the World. This in turn relied on earlier writings, including the Bible and those of the Roman historian Pliny.

Content
Superimposed on the geographical elements can be seen drawings and descriptions illustrating man's history and the marvels of the natural world. The map contains descriptions of many of the imagined inhabitants of distant lands, such as the Phanesii who are represented as having huge ears in which they wrapped themselves against the cold. In other respects, the map is quite accurate. It shows the source of the River Oxus, an important landmark since classical times, situated correctly near Samarkand. However, it is shown flowing into the Caspian rather than the Aral Sea.. India is described lavishly as having "5000 cities", providing images of a land of fabulous wealth and diversity. Here, a multitude of mythological races, beasts and amazing phenomena jostle for space and we are indebted to the cartographer for finding enough room for his drawing of the Sciapod, an extraordinary being who sheltered himself from the heat of the sun with his single enormous foot. Hereford appears in the map alongside the River Wye, its location marked by a drawing of the Cathedral.

At the top of the map is depicted Christ in Majesty sitting at the Day of Judgement. To His Right and Left angels summon the blessed and turn away the unrepentant. At His Feet the Blessed Virgin intercedes for those who have shown devotion to her. Among the chosen is shown a king wearing a crown and a bishop with his mitre. Behind them come supplicants on their knees in prayer.

Purpose
To the modern mind much of the content seems so wildly fanciful that it is difficult to believe that the same people who created the vast stone cathedrals, abbeys and castles of the medieval period, should have been persuaded so easily by the map's incredible claims. We may be wrong in imagining that the users of such maps were so impressionable. The map's limited value as a geographical tool was more than compensated for by its worth as a means of instructing the largely illiterate laity. Above all the confusion, doubt and bewildering complexity of the world as shown in the map was the dependable figure of Christ. Here was shown something worth believing in, the remedy for doubt and despair, and the path to salvation.

An enlarged image (in black and white) can be found here.
Posted by Jan at 7:42 PM