Blast From the Past: The Saga of the Persian Princess 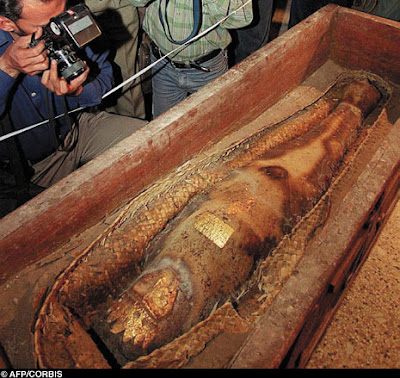 From the archives of Archaeology Magazine online

In a dangerous corner of the world, uneasy neighbors clamor for the gilded remains of a mummified noblewoman. Trouble is, she's a fraud.

The bizarre tale of a mummy adorned with a cuneiform-inscribed gold plaque identifying it as a 2,600-year-old Persian princess, perhaps, according to one translation, a daughter of the king Xerxes, began trickling out of Pakistan this past October. Found during a murder investigation, the mummy, an amalgam of Egyptian and Persian elements, had evidently been for sale on the black market for a cool $11 million. While archaeologists in Karachi tried to make sense of the mummy, a dispute between Iran and Pakistan broke out over its ownership. Afghanistan's Taliban regime hinted that they, too, might claim it. Then, one November day, thousands of miles from where the mummy lay in Pakistan's National Museum under the watchful eye of armed guards, ARCHAEOLOGY was shown documents identifying the Persian princess as a fraud.

According to newspaper reports, Pakistani authorities learned of the mummy in mid-October, when they received a tip that Karachi resident Ali Akbar had a video tape showing a mummy he was selling. After interrogation, Akbar led police to the remains, which were being kept in the house of tribal leader Wali Mohammad Reeki in Quetta, capital of Pakistan's southwestern Balochistan Province, which borders Iran and Afghanistan. Reeki told police he had received the mummy from Sharif Shah Bakhi, an Iranian who allegedly found it after an earthquake in a nearby town. Reeki and Bakhi had agreed to sell the mummy and split the profits; Akbar's role is less clear. Reeki said an unidentified representative of an anonymous foreign buyer had offered 60 million rupees ($1.1 million) for the mummy, well below the 600 million rupee ($11 million) asking price. Reeki and Akbar were charged with violating Pakistan's Antiquity Act, which carries a ten-year maximum sentence; Bakhi remains at large.

The mummy was brought to the National Museum in Karachi as news of it spread quickly through the local and international press. In an October 26 press conference, clips of which appeared on NBC's evening news, archaeologist Ahmed Hasan Dani of Quaid-e-Azam University in Islamabad announced that the mummy, wrapped in Egyptian style and resting in a wooden coffin carved with cuneiform writing and images of the Zoroastrian deity Ahura Mazda, was that of a princess dated to ca. 600 B.C.

Museum officials shared results of a preliminary examination of the mummy and its inscriptions with a hungry press: her remains lay atop a mat coated with a mixture of wax and honey and were covered by a stone slab with additional cuneiform inscriptions; her name was Khor-ul-Gayan or Tundal Gayan; and she may have been the daughter of Karoosh-ul-Kabir, first ruler of Persia's Khamam-ul-Nishiyan Dynasty. Alternatively, Dani said, the mummy could be of an Egyptian princess, married to a Persian prince during the reign of Cyrus I (640-590 B.C.), whose body had been preserved following the custom of her own country. Various theories circulated about how it came to Quetta. National Museum curator Asma Ibrahim suggested it may have been looted from a tomb in the Hamadan region of western Iran or the southwestern Pakistani area of Kharan.

Shortly after the press conference, the Iranian Cultural Heritage Organization, claiming the mummy was of a member of the Persian royal family, said it would take legal action through UNESCO for its return. Salim-ul-Haq, director of Pakistan's Archaeological Department's Headquarters, retorted that the mummy was found in Kharan in Balochistan Province, "which is one hundred percent Pakistani territory. The mummy is property of Pakistan." At that point, Iran said it was cooperating with Interpol for the mummy's return. Pakistan's foreign minister warned against politicizing the issue, while the Taliban, the rulers of most of Afghanistan, demanded that their archaeologists play a role in deciding its ownership.

There were divisions even within Pakistan. A petition filed with the Balochistan High Court asked for the return of the princess to Quetta, claiming the police raid in which it was seized had been illegal and that the action had "spread panic among the people of Balochistan, who felt deprived of their cultural, historic, and valuable heritage." The Awan tribe of Balochistan, saying the inscriptions proved the princess belonged to the Awan royal family of Hika Munshi, asked that the mummy be moved immediately to the local Kallar Kahar Fossils Museum.

While the conflict continued, there were subtle signs the Pakistanis were not sure exactly what they were keeping under guard in their National Museum. The local press reported that insurance companies were reluctant to cover the mummy until its legitimacy was proven. Dani insisted it was of Egyptian origin, pointing out that mummification was not practiced in Iran or Iraq, and conceded that the cuneiform inscriptions may have been added by smugglers after the body was taken out of Egypt.

Possibly in response to Dani's assertions, Iran fired back, claiming that an Italian archaeologist had translated the inscription, presumably through examining photographs, and confirmed that the mummy was of a member of the ancient Persian royal family.

Two weeks after the discovery first hit the press, Oscar White Muscarella of the Metropolitan Museum of Art and author of The Lie Became Great: The Forgery of Ancient Near Eastern Cultures (see "Scourge of the Forgery Culture," this issue), visited ARCHAEOLOGY's offices, where we asked for his thoughts on the Persian princess. While unaware of the recent find, Muscarella volunteered that its description sounded remarkably similar to photographs of a gold-adorned mummy sent to him last March by a New Jersey resident on behalf of an unidentified dealer in Pakistan--in fact, they were the same.

Muscarella had received four photographs of a mummy in a wooden coffin, replete with golden crown, mask, and inscribed breastplate. An accompanying letter stated that the mummy was owned by a Pakistani acquaintance and was brought by Zoroastrian families many years ago from Iran to Pakistan. The author claimed that the mummy was the daughter of the Persian king Xerxes, referring to an attached one-page translation of the cuneiform inscription on the breastplate. The owners, he wrote, had a video of the mummy--most likely the same video found with Ali Akbar in Karachi--that could be sent to New York if the museum was interested in purchasing the princess.

Muscarella, who suspected immediately that the mummy was a fraud, contacted the translator of the inscription, a cuneiform expert at a major American university, and found out that the dealer's New Jersey representative had not given him the complete analysis of it. The inscription does indeed contain the line "I am the daughter of the great king Xerxes," as well as a sizeable chunk lifted straight from a famous inscription of the king Darius (522-486 B.C.) at Behistun in western Iran. The Behistun inscription, which records the king's accomplishments, dates to 520-519 B.C., substantially later than the 600 B.C. date proposed for the mummy. The second page of analysis listed several problems with the mummy's inscription that led the scholar to believe that its author wrote in a manner inconsistent with Old Persian. The inscription, he concluded, was likely a modern falsification, probably dating "from no earlier than the 1930s."

Convinced that the scholar's twentieth-century date was incorrect, the dealer's representative apparently sent a small piece of the wooden coffin to a carbon-dating lab. The results indicated it was approximately 250 years old "which cannot be called modern," complained the representative in a follow-up letter to the cuneiform expert.

Muscarella politely broke off communications with the man. Seven months later, police raided the house in Quetta and the Persian princess surfaced again--this time under the glare of the international press.

ARCHAEOLOGY has submitted Muscarella's documentation to federal authorities, who have forwarded the matter to Interpol. Hopefully, by the time this article goes to press, the dispute between uneasy neighbors in a dangerous corner of the world will be resolved. While the Persian princess may be a fraud, perhaps a genuine Egyptian mummy with forged Persian additions, she is a reminder of the powerful emotions that can be sparked by unprecedented, or unbelievable, archaeological discoveries.