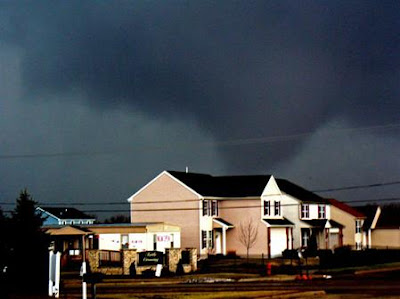 Our January thaw as struck with a vengence!

The temperature got up to 63 degrees today and with the rain that came along, what was left of the snow cover after this warm weekend has almost disappeared.

While I was at the office today, blissfully unaware of the fierce storms outside, at least one tornado hit in Kenosha County this afternoon and high winds and strong thunderstorms rolled through the area. The weather folks are calling this a once in 100 years event (except we had one in January in 1967). Right now things have calmed down, although the walk home from the bus tonight was a bit spooky. When I got off the bus it wasn't raining; I stopped at the supermarket; loaded down with two bags of groceries, of course it started raining when I was half-way across the large parking lot headed toward the street corner. Then it stopped. Then it started. Then it stopped again. Then it poured for about 1 second. Then it stopped. And so on and so on all the way home (9 blocks plus a bit once I hit the corner). Looking up, I could see areas of clear sky, and flashes of lightning, in between bursts of rain. A few minutes ago, it was pouring outside, now it has subsided again.

There were no tornadoes around here and I saw no evidence of wind damage on the walk home tonight, but Kenosha County and other counties to the west got hammered. The main worry here is flooding - and the fog. Yesterday there were two fatalities in the Madison area in two separate pile-ups on the highway "caused" by thick fog. Even as I was walking home I could see the ground fog rising due to the temperature differential.
Posted by Jan at 6:38 PM