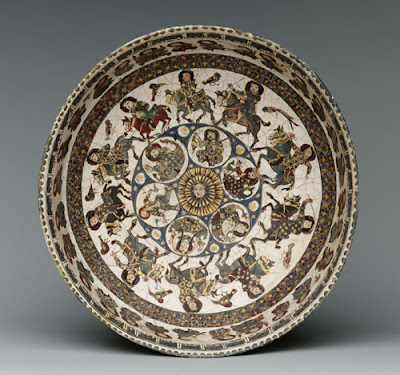 Bowl
Central or northern Iran
Late 12th–early 13th century
Overglaze and gilded composite body
Purchase, Rogers Fund, and Gift of the Schiff Foundation 1957 (57.36.4)
Thank goddess this piece is in a museum; today if it was in Iran it might run the risk of being destroyed by radical Islamists who claim that any representation of a living thing in art work is forbidden by Islam.
But - that is just not true. Take a look at this piece in the Metropolitan Museum of Art's collection. I have seen many representations of human beings and animals in art from the middle east after Islam became the dominant religion. This incredibly beautiful piece was created in Iran about 600 years AFTER the time of Mohammed. There are probably thousands of pieces of this kind of art preserved in museums throughout the world, not to mention illustrations in surviving books that date from the 11th to the 16th centuries CE.
So, do not believe anyone who tries to tell you Islam prohibits the depiction of humans and animals in art work. Too much art has survived to prove without a doubt the fallacy of this assertion.
By the way - are those WOMEN riding the horses around the outer ring? Take at look at some of the figures in the inner ring - they have beards, so they are easily distinguishable as men. Many of the other riders sure look feminine to me. Iran DOES have a history of ancient female warriors, so I wouldn't be surprised if they were used as models in this depiction of the Zodiac.
At the center of this vessel, the sun appears circumscribed by the planets. Astrological imagery, originally derived from representations developed by Greek astronomers, became popular in Islamic art beginning in the twelfth century. It was believed that the zodiacal imagery endowed such works with cosmic powers that would protect and preserve the owner from sickness, bad luck, defeat, and loss of influence.
**************************************************************************************** 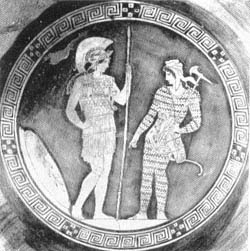 Allah wasn't mentioned as all...

Here is a depiction of at least one Iranian female warrior (the woman on the right). I believe this is a Greek dish although it is not identified as such in the article and no date or identification of the plate is provided. The reason I name the woman on the right as the Iranian is because the style of dress and the pattern in the material of her clothing is very similar to depictions of male Iranians I have seen that date to the mid to late Sassanian Empire. The woman on the left seems to be dressed in Greek war regalia. From a Persian Journal story - FIRST IRANIAN QUEEN REGNANT WHO RULED IRAN OVER SASSANID EMPIRE, September 2, 2005. (The Sassanid Empire: 226–651 CE)
Posted by Jan at 2:46 PM

hello,
my name is elita karim and i work for the star magazine, a weekly publication of the daily star in dhaka, bangladesh. i really like this article of urs. i m working on a story which has a similar theme and i wud like to use some of the information from this particular article along with the pictures of the art pieces (with the due credit of course.)

please do email me at elitakarim@gmail.com .